As Japanese Finance Minister Yoshihiko Noda prepares to become his nation’s sixth new Prime Minister since the popular and comparatively long-lived Junichiro Koizumi stepped down just five years ago, he and his top advisers face the challenge of figuring out how to avoid the common fate of his five short-lived predecessors.

The pattern is clear: each new Prime Minister starts out with relatively high approval ratings, normally in the 55-65% range (although in Monday’s intra-party race former Foreign Minister Seiji Maehara was the overwhelming public favorite, drawing over 40% in an Asahi Shimbun poll, while Noda drew less than 5% support, so he might start out with less than the standard level of support for a new Prime Minister).

Then, inevitably, the new Prime Minister’s support level starts its slow but steady decline. After about a year, approval dips and stays below 20%, the Prime Minister resigns, and the cycle repeats. 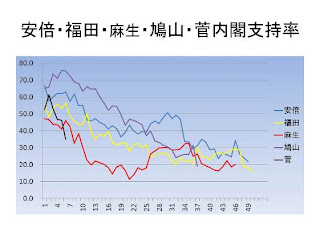 Graph 1: This comparison of the support levels of Prime Ministers Abe, Fukuda, Aso, Hatoyama, and Kan was posted on a right-wing blog in the summer of 2010, making the point that after six weeks Kan’s approval rating (in black) was falling even faster than his predecessors. Source: “正しい歴史意識、国益重視の外交、核兵器の実現 [Proper Historical Consciousness, Diplomacy Emphasizing the National Interest, and the Realization of Nuclear Weapons], July 19, 2010.
But as the following chart of approval ratings for the Kan cabinet makes clear, in September 2010 this pattern was broken. 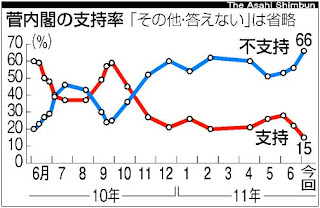 Graph 2: Asahi Shimbun polling showing the approval (red) and disapproval (blue) ratings of the Kan cabinet from its inauguration in June 2010 through July 2011. Source: “首相辞任「８月末までに」７割 [Poll: 70% call for Prime Minister’s resignation “by the end of August]," Asahi Shimbun, July 11, 2011.

By the time that a Chinese fishing trawler collided with a pair of Japanese Coast Guard vessels in waters near the disputed Senkaku Islands on September 7, 2010, the Kan cabinet’s approval rating had already dropped from 60% to below 40%. The collision was initially reported as a minor incident in the Japanese press, but media attention grew as an outraged China demanded a full apology and the return of the arrested captain and crew.

To the surprise of the Japanese press, the Kan administration refused.

The ensuing diplomatic standoff lasted for weeks, and drew global attention. The Kan administration released the crew, but moved to press charges against the captain. China responded by ratcheting up the diplomatic pressure to a level that astounded most observers in Japan and the US, even hyping a planned reduction of rare earth metal exports to Japan as an embargo  – a key component of almost all high-tech modern electronics that is currently produced almost exclusively in China.

And public approval ratings for the Kan administration soared.

This point was lost in most Western media coverage of the standoff, but all major Japanese media reported the same trend: support for the Kan administration continued to climb with each day that it stood up to China. The cabinet regained its inaugural level of support, and appeared headed for even higher levels.

Then, on September 25, the Kan administration folded. The Chinese trawler captain was released and sent back to China without a trial.

U.S. officials applauded what they described as an “adult” gesture by the Kan administration to diffuse the situation, but the Japanese media was unanimous in condemning the move as a show of diplomatic weakness. Public opinion quickly followed suit: the Kan cabinet’s approval rating plunged, and never again regained even its pre-collision level.

Unfortunately, with its show of support for Prime Minister Kan in the weeks before he backed down, the Japanese public unwittingly raised the security risk in northeast Asia.

Incoming Prime Minister Noda has already shown that he is not overly concerned about Chinese or Korean sensibilities. It is difficult to imagine any Japanese prime minister deliberately picking a fight with a rising China, but it is not at all hard to imagine another seemingly minor incident sparking another diplomatic conflict between Japan and China.

If Noda or any future Japanese prime minister studies the Senkaku collision incident and concludes that the way to win domestic public support is to stand up to China, the stage will be set for a significant confrontation between northeast Asia’s two biggest military and economic powers. Handling such a confrontation would be a major challenge not just for leaders in Tokyo and Beijing, but also in Washington, DC.