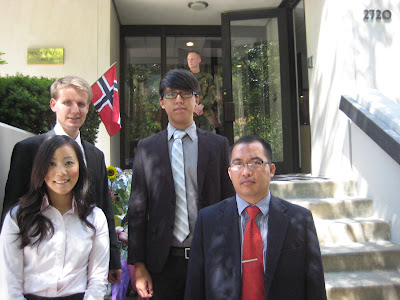 On July 27th, APP staff and interns visited the Norwegian Embassy to express their sympathy with the country's national sorrow and to sign the condolence book.

Anders Behring Breivik was not the first right-wing Norwegian to betray his country. The most famous was Vidkun Quisling who gave Hilter Norway's defense plans allowing the German Reich to successfully invade the country. Quisling was made Minister-President during the war and executed by firing squad shortly after. His last name has forever become the ultimate description of a national traitor.
at August 10, 2011