Chinese Repression of Muslims in Xinjiang Echoes Across Central Asia 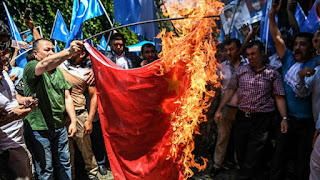 Beijing’s efforts to expand its power in Central Asia by investment and cooperation with the governments in the region (see China Brief, November 19, 2019; see EDM, April 4, 2019, January 30, 2018, August 2, 2016) are currently being undercut by the reactions of Central Asian populations to China’s repression of their co-ethnics and fellow Muslims in Xinjiang. Central Asians know far more about Chinese actions there than many might expect for three reasons: 1) the flight of such people from China to Central Asia, 2) the use of the Internet by Uyghurs and other activists to tell the world and particularly Central Asia about their plight, and 3) the exploitation of this information by opposition politicians in Central Asian countries.

Many members of the Central Asian nationalities currently living in Xinjiang have ancestors who escaped there after the Soviets crushed the Basmachi movement (Turkestan Liberation Organization) in the 1920s and 1930s. But over the past several months, they have been fleeing western China in increasing numbers and, upon arrival to their ancestral homelands, telling their co-ethnics about the concentration camps that the Chinese authorities have confined them to in the hopes of “re-educating” them away from Islam and national traditions and toward Beijing’s preferred values. The massive scale of this flight was highlighted in a recent report issued by the Ministry of Foreign Affairs of the Republic of Kazakhstan. It states that during the first nine months of 2019, 4,500 ethnic Kazakhs from China resettled in Kazakhstan with the right of permanent residence as “oralmans,” the name Nur-Sultan has used for co-ethnic returnees (Centralasian.org, November 17; Fergana.agency, September 19).

Their personal accounts of mistreatment at the hands of the Chinese have inflamed Kazakhstani opinion, which had already been growing more hostile to Beijing because of Uyghur use of the Internet to document Chinese repression. In a recent issue of the Central Asian Survey, Rachel Harris of London’s SOAS and independent scholar Aziz Isa report on the way this works in an article entitled “Islam by Smartphone: Reading the Islamic Revival on WeChat.” Because this channel has proven so influential in Central Asia, and especially in Kazakhstan, it has attracted enormous attention there by independent media there and, thus, had a dramatic effect on the populations (Fergana.agency, March 6).

This development appears to have contributed in a significant way to the spread of anti-Chinese protests in Kazakhstan this fall. Those demonstrations, some of the largest in that country’s history, have taken place in almost all major cities and have put strains on relations between Kazakhstan and China. To be sure, the reports from Xinjiang and first-person accounts by those who fled that Chinese region are not the only cause. Many Central Asians have long resented the fact that the Chinese have often behaved extremely arrogantly in their dealings with the governments in the region, seemingly exploiting them in an openly neo-colonial way, and not providing these countries with the kind of support (relative to the Russian Federation and other outside powers) they had hoped China’s involvement would create (see EDM, September 10).

Anti-Chinese attitudes, linked to the Xinjiang case and otherwise, are not confined to Kazakhstan but exist, and appear to be intensifying, in all the countries of the region, with Chinese involvement in their economies and politics and Chinese mistreatment of their co-ethnics in Xinjiang being the leading causes. According to Bishkek-based journalist Pavel Dyatlentko, anti-Chinese attitudes have been on the rise throughout Central Asia; and whenever they have led to protests, Beijing reacted quickly and punitively, shutting consulates and suspending investment projects—actions that are only making the situation worse (Ia-centr.ru, September 11).

In Kyrgyzstan and Tajikistan, he says, some Kyrgyz and Tajiks have expressed alarm at the massive debts to China that Bishkek and Dushanbe have run up, a development that many fear Beijing will exploit to gain political dominance. Elsewhere, the fact that Chinese investments have sparked Chinese immigration rather than created jobs for Central Asians is the bigger problem. Central Asians resent the appearance of “China towns” in their countries just as much as some in Russia’s Far East do (Vzglyad, August 15, 2018). And protests against the Chinese presence and Chinese repression have become part of the domestic political struggle in many of these countries.

According to Dyatlenko, as China has expanded its presence with the full cooperation of the regimes in power, opposition politicians have begun to play on this theme, recognizing that the Central Asian populations are not on the same page as their governments, as far as China is concerned. Given that China is likely to continue to expand its presence, further irritating local publics, the temptation of opposition groups to exploit such anger will only grow. If that happens—and the Bishkek commentator argues it will unless alternative sources of foreign investment appear—the anti-Chinese demonstrations that have taken place to date will be only the prelude to a situation that could easily spiral out of control, ethnicizing politics in these countries still further.

Should that occur, the consequences of the impact of China’s actions in Xinjiang and its moves to expand its position in Central Asia could transform the regional republics still further, sparking more Russian flight and even becoming another source of discord between Moscow and Beijing. The timing of such a cooling of relations would be particularly inauspicious for the Kremlin considering President Vladimir Putin’s current efforts to both promote a Russian-Chinese alliance against the United States as well as to recover Russia’s influence in Central Asia.
at November 22, 2019