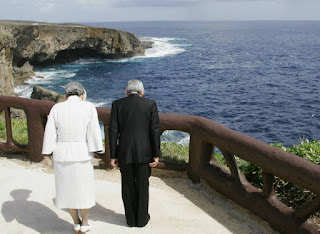 Just before the emperor’s retirement and the change of era, the activities of the emperor and the imperial family suddenly came to life and the news media were overflowing with stories that struck a tone of veneration. Memorial visits to Okinawa, Saipan, and other battlegrounds and devastated sites and the people’s reception of okotoba [お言葉], or his message to the public (see note below), created an atmosphere that embraced these actions by the emperor. Moreover, many pundits and constitutional scholars positively support the actions of this emperor, interpreting them as subtle criticisms of the current administration.

But we must stop and think about this carefully. For here we see a fundamental contradiction between the symbolic emperor system and democracy.

The Constitution of Japan made the emperor a symbol in reaction to the repeated pattern of colonization and wars of aggression that occurred under the Meiji Constitution, which placed all political power in the emperor. With hoyoku [輔翼] - literally, assisting wings, but meaning, in consultation with the military, the emperor pursued war with no check from the cabinet, much less the Diet. This led to the horrifying descent through disastrous battlefields that took the lives of approximately 20 million people across Asia, including Japan.

The present Constitution preserved the emperor, but based on this experience, removed all political power, limiting the emperor to the performance of ceremonies listed in the Constitution as “acts of state (kokuji koi [国事行為]),” subject to the advice and consent of the cabinet.

Two contradictions have increased during the Heisei era. The first is that political statements and actions by the unelected emperor have had a great impact on politics. Even though there is strong suspicion that the frequent and generally accepted messages (okotoba) and appearances (odemashi) of the present emperor are unconstitutional, they will be inherited by future emperors; we should expect that conservative administrations will take significant advantage of these fait accompli.

The second, a much more serious problem, is that by relying on the authority of the emperor, people will obscure their own awareness and responsibility as sovereigns and will continue to avoid addressing problems. Issues like war responsibility, the work of building a country that does not engage in war, nuclear power, and the military bases in Okinawa should be resolved by the people themselves.

Visits by the emperor and imperial family members and messages (okotoba) may offer a temporary reprieve, but they cannot solve problems, nor should they. If there are issues with the Abe administration, it should be the people themselves, not the emperor, who criticize them and change the regime.

So what should be done about the emperor system? First, we should move closer to the symbolic system stipulated in the Constitution. The emperor’s public activities should be strictly limited to “acts of state.” Official visits abroad described with such labels as “imperial diplomacy” (kōshitsu gaikō  [皇室外交] should be stopped. If the emperor absolutely wishes to travel abroad, he should do so as a citizen, in other words as a private person.

“Traditions” that conflict with human rights provisions of the Constitution, such as limiting attendance to males only at change of era ceremonies, limiting the emperorship to males, conducting religious ceremonies such as the Daijosai as “official acts,” should be reviewed immediately with the goal of embedding the emperor system within democratic society.

Regarding war responsibility and related issues, the people should not simply accept the emperor’s “visits” and “messages”; instead, the people should act as sovereigns, facing these issues squarely and building a politics to deal with them.

Even so, the contradiction between the emperor and democracy will remain, but the road to its resolution can only be found through these kinds of measures.

--The above translation first appeared in the September 1, 2019, Volume 17, Issue 17, Number 3 of Asia-Pacific Journal of the original “Kenpo to no mujun hirogatta – Shocho tenno sei to minshu shugi,” a Kyodo News Agency article that appeared in Chugoku Shimbun, on April 19, 2019.

Translator’s note
Various terms are used to describe deeds of the emperor, and okotoba is one of them. It is a combination of “kotoba,” meaning words, and “o”, an honorific, and together, okotoba has a connotation of “words from on high.”
at September 10, 2019