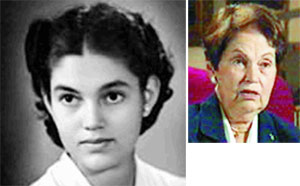 Jan was the Dutch Comfort Woman who traveled from her home in Australia to testify to a subcommittee of House of Representatives Foreign Affairs Committee in February 2007 about how she was taken from her internment camp in 1944 on Java by Imperial Japanese Army officers for one of their brothels. Current research estimates that more than 1,000 Dutch, Indo-Dutch, and missionary women in the Japanese occupied Dutch East Indies were forced to be sex slaves to the Japanese military. This number does not include indigenous girls and women forced to become Comfort Women.

Jan was an extraordinarily brave and determined woman who was a civil rights icon and inspiration to women worldwide. Her daughter said that "a warrior has passed." Interview with Jan Ruff-O'Herne.

In 1992, after seeing on CNN the Bosnia rape victims and the Korean Comfort Women--sex slaves to the Japanese military--come forward to appeal for justice, Jan decided to finally tell her story of rape and survival.

She worked with the UN Human Rights Commission, International Red Cross, and Amnesty International, speaking in Australia, New Zealand, Japan, the US and UK, the Netherlands and many other countries, sharing her incredible story.

Jan never believed that Japan had adequately apologized to the Comfort Women and refused to accept the "medical payments" offered by a private Japanese fund in the late-1990s. Of the hundreds of the then-recognized Comfort Women, only 78 men and women accepted these payments. Jan wanted an unequivocal government apology and atonement payment. She was disappointed by Prime Minister Shinzo Abe's backtracking on Japan's limited apology.

Jan received an Order of Australia in 2002, a papal honour from Pope John Paul II, Dame Commander of the Order of Saint Sylvester in the same year and in 2004 received a Centenary medal from Prime Minister John Howard for contributions made to Australian society.