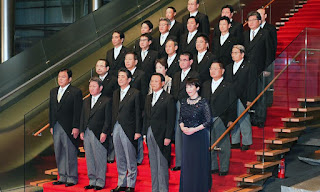 By Daniel Sneider, a Stanford lecturer and APP member, is associate editor of the Washington-based Nelson Report, which first published this article.


The naming of Prime Minister Shinzo Abe’s new cabinet has launched what are supposed to be the final two years of his already historically long administration.

The new cabinet and the opening statement by Abe reflect the schizophrenic nature of his administration, for there are really two Abes.

There is the outer Abe or, perhaps more precisely, the pragmatic Abe, whose focus has been on reviving Japan as a dynamic power with a more assertive claim to leadership in the region and globally. In that version, the priorities are economic growth and effective management of relations with the US and with China and the rest of Asia.

Then there is the inner Abe, the ideological Abe, who still feels the pull of history: unfinished tasks of ending the postwar era, as viewed through the lens of the Japanese revisionist conservatives. That Abe asserts the priority of finally revising, and in effect repudiating, the anti-war provisions of the constitution adopted under the weight of American military occupation. The current focus on the dispute with South Korea over wartime history issues reflects, to some degree, that outlook as well.

Both Abes were on view last week, and the debate was reflected in the array of commentary in the major Japanese media.

The Bolton question
But before getting to that, there is the unintended overlap with the new Abe cabinet of John Bolton’s ouster from the White House. Ironically, the cabinet change coincided also with a shakeup in the Japanese counterpart to Bolton – the replacement of the well-respected former Vice Foreign Minister Shotaro Yachi with the intelligence boss of the National Police Agency, Shigeru Kitamura, as well as an elevation of Abe’s close aide, former Ministry of Economy, Trade and Industry bureaucrat Takaya Imai.

Bolton’s departure was seen by some in the Japanese media as a bit of a blow to Abe’s ability to manage relations with the mercurial Donald Trump, coming at a sensitive moment when there are attempts to finalize a trade deal and talk of another summit with North Korea. Bolton was widely seen as being “pro-Japanese” and, perhaps more importantly, as a voice within the White House opposing the kind of limited bargain with North Korea that would leave intact the missiles and warheads that directly threaten Japan.

“From Abe’s perspective,” a veteran Japanese journalist told me, “Bolton was the stabilizer of Trump’s volatility and, above all, the thermostat of simmering love between Trump and Kim Jong Un – plus the cold-eyed critic against [South Korean President] Moon Jae-in’s fantasy of the unified peninsula.

“In addition, Bolton was important to Abe in the sense that there was relatively reliable communication channel kept between Yachi and Bolton,” the journalist added. “Now both are gone. Once again the Abe administration is back into an uncharted territory of Trump’s impulse game with allies. Neither [Secretary of State Mike] Pompeo nor [NSC Asia director Matt] Pottinger can be any match to Bolton as a consistent counterpart, even if he was a neocon jerk.”

For some observers, however, this would overstate the importance of Bolton.

“The Abe-Trump relationship stood on its own two feet, so Bolton’s departure likely has little impact on the bilateral relationship overall,” veteran Japan hand Brad Glosserman, deputy director of the Center for Rule Making Strategies at Tokyo’s Tama University, told me. “For all the alignment of views between Bolton and Abe, there is little indication that Bolton moved US policy in ways that benefitted Japan. The president is the decision maker and there is little sign that DJT acted on any particular issue because Bolton pressed his view upon him.”

That view can be found widely within the Prime Minister’s office and the National Security Secretariat – there is some degree of confidence that Abe can successfully manage the challenges ahead, beginning with the trade negotiations, followed by the prospect of another North Korea negotiation and finally upcoming tense talks on defense cost sharing. But behind that confidence lies the belief that Japan mainly has to play for time, to do what they can to keep the wolf of Trump’s neo-isolationism at bay and survive the coming election year.

The new cabinet and constitutional revision
The unveiling last week of the new Abe cabinet reflected the two sides of the Prime Minister.

On the one hand, there was a clear genuflection toward the revisionist right. The prime minister declared at his press conference that constitutional change was his priority and he called on the opposition to yield to demands to open parliamentary debate on this, the necessary step towards a national referendum. “As we stand at the start of the new Reiwa Era,” Abe said, referring to the ascension of the new Emperor, “we are on the cusp of creating a new Japan…and on the horizon is the challenge of constitutional revision.”

The cabinet is filled with Abe loyalists ready to do his bidding, and is peppered with leaders of the revisionist rightwing Nippon Kaigi (Japan Conference) who are well known advocates of constitutional revision. Among them are new education minister, Koichi Hagiuda; Seiichi Eto, who is a key figure in Nippon Kaigi; Sanae Takaichi, who was reappointed as minister of Internal Affairs and Communications, where she has led the charge to purge the television broadcasting networks; and, not least, former education minister Hakubun Shimomura, who now has a senior post in the ruling Liberal Democratic Party (LDP) where he has been a leading voice on promoting constitutional revision.

The main media backer of this focus for Abe is, of course, the Fox News-like daily newspaper Sankei Shimbun and its affiliated television network, Fuji Television. “We cannot afford to put off constitutional revision any further,” Sankei editorialized on September 12. “Whether Japan can enjoy peace and prosperity in the future is called into question.”

The problem for Abe and the right is two-fold. First, the changes in interpretation of the constitution made by the Abe administration in 2015 have already made it possible for Japan to carry out any imaginable security role, without the need for a formal amendment.

More importantly, despite the right’s having pounded away on this issue for decades, and particularly during Abe’s rule, the Japanese public does not support changing the anti-war clause of the constitution. People understand very well that, however it may be worded, a change in Article 9 has huge symbolic meaning. While polls showed a bump in popularity from the cabinet reshuffle – a normal event in Japan – they also showed that only 38.8 percent supported Abe’s constitutional obsession, while 47.1 percent were opposed.

The opposition parties, with the exception of the Osaka-based Nippon Ishin no Kai (Japan Innovation Party), are united in refusing even to open a parliamentary debate on this. Without that, it will be almost impossible for Abe to move ahead. And while the LDP remains dominant, recent elections in which the left and centrist opposition parties managed to stand together may only encourage this stance. The Constitutional Democratic Party of Japan and the Democratic Party for the People joined with the two leftist parties, the Communists and Social Democrats, to easily re-elect the governor of Iwate last Sunday, following a victory in late August in Saitama over a more formidable LDP candidate.

The lack of a political environment to push the rightwing agenda was clearly on the mind of the more mainstream conservative daily, the Yomiuri Shimbun, which called on Abe to pay more attention to a possible downturn in the Japanese economy and to reform of the heavily burdened social welfare system. The national sales tax, the consumption tax, will go up 2 percent on October 1, to 10 percent which is considered necessary for securing the social security system. But it may also trigger a recessionary downturn in consumer spending. With the US-China trade war already creating a drag on the Japanese economy, “the re-reshuffled cabinet should first focus on economic policy,” the Yomiuri opined on September 12.

Given the uncertainties of US-Japan relations and the unstable security situation in the region, the conservative daily wrote, it is important for Abe to “create an environment for discussion” of the constitution first.

While Abe made his gestures to the ideological side, he also gave key positions to LDP leaders who have been essential to carrying out his pragmatic foreign policy. The move of economy minister Toshimitsu Motegi over to the foreign ministry, where he will continue to run the trade negotiations with the US, is key, as is the shift of Foreign Minister Taro Kono over to the defense ministry. Motegi, who is seen as one of the more competent and capable figures in the party and who enjoys a close relationship with Abe, will also have the responsibility for trying to ease the tensions with South Korea.

All this suggests that the pragmatic Abe will likely prevail over the ideological one.

“Abe still harbors those conservative ambitions but the mechanics of an amendment remain quite complex, the ruling coalition is split and the public is ambivalent about amendment under Abe,” comments Glosserman. “Amendment requires a benign external environment as well. If the economy takes a dive, if there is a big international crisis, especially in the region, political energies will be redirected. And if there is a regional security crisis, and Japan steps up without constitutional change, it would undercut the perceived urgency of amendment. And then there are the Olympics.”
at September 21, 2019