Is Trump stringing Abe along? 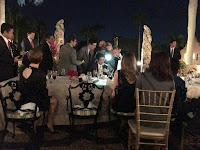 Yes, because Abe does not understand the deal
EastAsiaForum, June 3. 2018
Glen S Fukushima, Center for American Progress and APP member
Japan has been reeling ever since 8 March when US President Donald Trump met with South Korea’s national security adviser Chung Eui-yong and announced, to the world’s surprise, that he would accept the offer to meet with North Korean leader Kim Jong-un. Until then, Japanese Prime Minister Shinzo Abe was confident that he was ‘managing’ Trump well, starting with the meeting in Trump Tower on 17 November 2016 that made him the first foreign leader to meet with the then president-elect.This was followed by the meeting in Washington, DC on 10 February 2017 and golf and dinner in Mar-a-Lago, Florida, when North Korea’s missile launching forced an impromptu news conference pledging US–Japan solidarity against North Korea.
By the time Trump visited Japan on 5 November 2017, the two leaders had had several face-to-face meetings and nearly 20 telephone calls to coordinate on North Korea. In addition, Abe and his aides were pleased that Trump had adopted the slogan of the ‘free and open Indo-Pacific’, since the idea of a US–Japan–India–Australia alliance against China was already a centrepiece of Abe’s diplomacy.
But contrary to Abe’s expectation, Trump started to show his true colours by the beginning of his second year in office. On 22 January 2018, Trump announced the imposition of 30 per cent tariffs on Chinese solar panels and 50 per cent tariffs on South Korean refrigerators exported to the United States. On 1 March, he announced the imposition of 25 per cent tariffs on steel and 10 per cent tariffs on aluminium exported to the United States. Most alarming to Japan, on 23 May, Trump ordered an investigation under Section 232 of the Trade Expansion Act of 1962 on whether the import of automobiles could constitute a national security threat to the United States, justifying the imposition of tariffs of up to 25 per cent.
All of this is a reflection of Donald Trump’s worldview, which was shaped in the 1980s. During this period he gave numerous speeches and interviews in which he decried the United States’ decline, which he blamed on foreigners taking advantage of the United States. In 1987, he paid nearly US$100,000 to place full-page ads in the New York Times, Washington Post and Boston Globe to criticise Japan for stealing US jobs, exporting to the United States but not importing, manipulating its currency for export advantage and free-riding on defence.
Trump writes on page 53 of The Art of the Deal: ‘The best thing you can do is deal from strength, and leverage is the biggest strength you can have. Leverage is having something the other guy wants. Or better yet, needs. Or best of all, simply can’t do without’.
Based on his numerous meetings with Abe, Trump knows that Japan cannot do without US military support against China and North Korea. In addition, he knows that Abe, for domestic political purposes, needs to show progress on the issue of Japanese abducted by North Korea. In return for providing Abe what he needs, Trump is expecting from Japan economic concessions, both on a national and personal level.
At this point, however, Japan is not as important for Trump as North Korea, South Korea and China. These countries hold the key to Trump’s political future: maintaining a Republican majority in the House of Representatives and in the Senate in the midterm elections of 6 November 2018 and winning re-election on 3 November 2020. Trump is using foreign policy to deflect attention away from Special Counsel Robert Mueller’s investigation into possible collusion with Russia by Trump and his team during the 2016 presidential campaign and subsequent obstruction of justice and conflicts of interest, from the lawsuits filed by Stormy Daniels and other women, and from the investigation into Trump’s personal attorney Michael Cohen.
By meeting with Kim Jong-un in Singapore on 12 June, Trump hopes to emulate former US president George W Bush in 2001. The Gallup Poll showed Bush’s approval rating on 1 February 2001 to be only 57 per cent. But by 22 September, it had jumped to 90 per cent as a result of the September 11 terrorist attacks on the United States. After his meeting with Kim Jong-un on 12 June, Trump is certain to declare victory, thereby demonstrating to the world his genius as a dealmaker, his qualifications to be awarded the Nobel Peace Prize and his right to win the elections in November 2018 and 2020.
Abe has scheduled a meeting in Washington, DC with Trump on 7 June — five days before the 12 June meeting — in order to make a last-ditch plea to include in the Trump–Kim meeting the return of Japanese abductees, the complete, verifiable and irreversible denuclearisation of the Korean Peninsula, and the dismantling of not only North Korea’s missiles that can reach the continental United States, but also the short- and medium-range missiles that can hit Japan.
For both Abe and Trump, foreign policy victories are imperative to win elections in the face of severe domestic political pressures.
at June 04, 2018