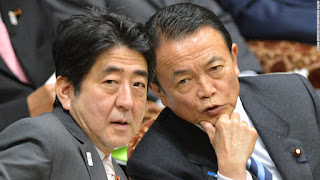 In Japan, Too, Outrageous Is the New Normal

TOKYO — A sketchy land deal implicating the prime minister’s wife is revealed, then a vast cover-up by government officials. The relevant minister acknowledges the wrongdoing, apologizes and says he will fulfill his duty — by refunding a year’s worth of his salary as cabinet minister, or about $15,600.

This is what passes for government accountability in Japan today.

The senior official in question is Taro Aso, the finance minister, who — with Prime Minister Shinzo Abe’s backing — has refused to resign.

Details of the land deal, which involves a school operator with ties to Mr. Abe’s wife, remain unclear. But it already is clear that the cover-up is worse than the crime and yet its culprits may get away with it. Although roiled by scandals and deflated by low popularity ratings, the Abe administration seems to think it can ride out the turbulence, banking on the few remaining checks on its power and public apathy about politics. And it may be right.

In June 2016, officials in the Finance Ministry discounted by more than 85 percent the asking price for land it sold to Moritomo Gakuen, the school operator. After Mr. Abe pledged to resign if evidence was found proving his or his wife’s involvement, government officials destroyed or tampered with records that might have compromised them. According to the finance ministry itself, more than 300 passages in over a dozen official documents were doctored in early 2017 to eliminate any inconsistencies with what ministry officials told opposition lawmakers who had grilled them about the deal.

Mr. Aso, who is also deputy prime minister, and Nobuhisa Sagawa, the former director-general of the Financial Bureau, which manages state-owned property, repeatedly gave false answers during questioning by lawmakers: on 11 occasions in the case of Mr. Aso and no fewer than 43 times in the case of Mr. Sagawa. Leaked government documents also indicate that the supposedly independent Board of Audit colluded with government ministries to shield Mr. Abe.

Suspicions linger that the finance ministry may still be hiding incriminating records. Yet on May 31, the prosecutor’s office in Osaka decided not to indict any of the 38 people (including 37 government officials) it was investigating for breaching taxpayers’ trust.

In another major scandal, another educational institution benefited from exceptional favors to win a state bid to open a veterinary school. Official documents from 2015 refer to “the prime minister’s intentions” as the force behind the deal and mention meetings between a local government official and a secretary to the prime minister and between Mr. Abe and the director of the school corporation, Kotaro Kake, a friend of Mr. Abe’s from university.

Mr. Kake and Mr. Abe have denied any impropriety. But only 14 percent of respondents in a poll conducted by the daily newspaper Mainichi on May 26-27 said they trusted the prime minister’s explanation about the deal; 70 percent said they did not.

Japan has long had problems with political accountability. A multimember-district system was established after World War II. By giving even small parties a chance of getting elected, it could have encouraged proportionality and representativeness. Instead, it quickly entrenched the conservative Liberal Democratic Party, which learned to toggle its candidates in response to shifts in the popular mood, and it fragmented the opposition. The L.D.P., Mr. Abe’s party, ruled for nearly four decades. A set of cozy relations known as the “iron triangle” developed between politicians, bureaucrats and corporations, and these groups’ pursuit of their narrow interests came to dominate politics, breeding collusion and corruption.

In the post-Cold War era, various reforms were introduced in hopes of creating a British-style two-party system and ensuring alternation of power. It was also thought that centralizing authority in the hands of the governing party’s leader, who had received a popular mandate by being elected, would increase democratic accountability.

But the system has failed, notably in the December 2012 election that most recently brought Mr. Abe to power. Although the L.D.P. received fewer votes then than in the 2009 election, which it lost, the party and its coalition partner secured a crushing majority in the Diet, as Japan’s parliament is known. After that, Mr. Abe made partisan appointments to key posts previously insulated from direct political influence, including at the Bank of Japan and the public broadcaster NHK. The L.D.P. took measures to curb the legislative branch’s ability to check the executive, including by limiting the opposition’s question time in the Diet.

With so much power now vested in the prime minister’s office, Mr. Abe embarked on a controversial series of laws, including on defense matters. Cronyism and corruption returned in force. Today’s scandals seem rather small compared with the Lockheed bribery case in the 1970s or the Recruit scandal of the late 1980s. But the extent of the recent cover-ups — and the fact that those seem designed to protect Mr. Abe personally — is new, and it undermines the legitimacy of Japan’s entire governance structure like never before.

So why, then, hasn’t there been more pushback?

One reason is that the opposition is too weak and too divided to hold this reckless administration accountable. When Mr. Abe called a snap electionlast fall, a poorly conceived attempt to challenge the government by launching a new challenger, the Party of Hope, ended in an abysmal failure, leaving the opposition even more fractured than before. In Sunday’s election for governor in Niigata, the front-runner for the opposition lost to the L.D.P. candidate even though she ran largely on a platform that opposed restarting the prefecture’s main nuclear power plant, a position favored by nearly 75 percent of voters, according to exit polls.

Unless the opposition can strengthen itself enough to threaten the L.D.P.’s grip on power, no internal rebellion is likely to materialize within the party itself. Mr. Abe is expected to seek a third term as party president during internal elections in September, and despite muted grumbling over his stewardship, a serious opponent has yet to emerge.

Mr. Abe’s popularity has seesawed in recent years, partly because of the scandals. Less than one-third of respondents in the Mainichi poll approved of his government (and 48 percent disapproved) — with nearly half of them citing as a reason the absence of a clear alternative. These are poor results, but Mr. Abe has weathered worse. The public seems more disgusted than outraged, resulting in its being alienated from politics rather than wanting to engage in it.

This suits Mr. Abe fine. In Sunday’s election in Niigata, for instance, which the L.D.P. candidate appears to have won by a bit more than 3 percent of votes, turnout was about 58 percent.

There have been so many scandals lately, it’s hard to keep track, or care. Logs of Japan’s peacekeeping force in South Sudan (and in Iraq many years ago) have disappeared from the Defense Ministry, only to surface at defense intelligence headquarters. The Health, Labor and Welfare Ministry has tampered with the results of workplace surveys that were supposed to serve as the factual basis for a comprehensive labor-reform bill. The twists and turns of the Moritomo Gakuen land deal have also been overtaken by extensive coverage of more sensationalistic stories, like illegal tackles in college football or the mysterious death of a munificent philanderer.

Conservative media outlets, apparently determined to protect Mr. Abe for ideological reasons — namely their shared hope of revising the Constitution — have played a part. The daily newspaper Yomiuri, for instance, has accused the opposition of being consumed by the scandals instead of the serious business of governing.

There was a time in Japan when if an administration was caught red-handed in as vast a cover-up as in this land-sale scandal, the mainstream media would have cried out in unison that Mr. Aso’s position was untenable. No longer.

Key democratic principles like transparency and accountability, which were never as entrenched here as in the United States anyway, no longer seem to be the lingua franca of public discussion. In this respect, the Abe administration is not unlike the Trump presidency: In Japan, too, what was once outrageous has become the new normal.
at June 12, 2018