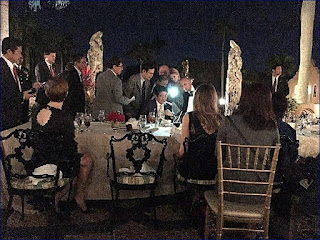 President Moon Jae­-in’s special envoy Amb. Hong Seok­-hyun had ten minutes with U.S. President Donald Trump to reconfirm the US­-South Korean alliance. With the President’s known attention span of only six minutes, this may have been more than enough. However, Seoul is way behind in “showing” Trump it's more important commitment, which is to the President himself.

Japanese Minister Shinzo Abe’s advisers quickly realized that the Trump’s campaign bluster reflected very little what Trump actually understands, does, and wants. To test and to blunt the President­-elect’s tough trade rhetoric, Abe’s team moved quickly through its business contacts to appease the President­-elect with a visual of his power through his first photo­-op as world leader with a world leader.

The hook was an appeal to Trump’s personal commercial interests and his desire to show he was tackling immediately a central campaign pledge on trade. This was the context of the Prime Minister’s November 17th meeting in Trump Tower, allowing Abe to become the only foreign leader to meet with Trump before his inauguration. The get­-together was arranged as if it were a business meeting through Trump’s tax lawyers, Morgan Lewis and their well­-contacted partner Satoru MURASE and casino magnate Sheldon Adelson who had deep financial ties to Trump and in Japan. Abe’s challenge was to mirror Trump by listening carefully and exploring how Japan can enhance the President’s trade and business agenda.

Adelson, who has proposed a $10 billion casino investment in Japan, then arranged for his sometime business partner Softbank’s Masayoshi Son to meet with Trump on December 7th. Son gave Trump another PR moment by repackaging a long­=proposed $50 billion investment in the U.S. and commitment to create 50,000 new jobs. This cemented Trump’s view that the Japanese were team players.

Fearful of all the 1980s trade warriors in Trump’s Administration, Abe’s government needed to deflect attention away from its growing trade deficit, anti­dumping cases, and anti­trust actions (64 Japanese executives are in US jails from anti­trust enforcement trials) with the US. The initial interactions succeeded, but the hard facts of the trade imbalances threatened to upend the goodwill being cultivated.

By demonstrating an affinity for military advisers and a penchant for dramatic, albeit limited shows of force, the Trump Administration gave Abe a new opening to convince the President that Japan was Washington’s best Pacific ally, ever. Most important, Abe knew he could not tell Trump this, but had to illustrate it. North Korea successfully gave Abe the opportunity to show Trump what a national threat to an ally looks like.

The Japanese government knew going into Abe’s mid­-February visit to Mar­a­Lago that North Korea would soon test fire a missile. As if on cue, Pyongyang’s projectile launched in the middle of Trump’s very pubic dinner with Abe. What emerged was a real­-time opportunity for Abe to share crisis management with the very inexperienced President.

Abe familiar with this kind of “crisis”—another missile in the ocean—skillfully managed Trump to feel as if he was participating not following in crafting a response. The result was that Abe is likely the only world figure that Trump allowed to speak at a press conference before he did and who he followed with only a simple awestruck sentence, that “the US stands with Japan.” Abe gave Trump what he craves most, drama.

Whereas Japan’s initial approach to Trump emphasized business and trade cooperation, playing on Trump’s desire to be a security leader have proved a more effective and longer­-term strategy. Cooperation over North Korea overshadows irritating issues such as trade, currency, and defense burden sharing. As a result, all of the unprecedented six telephone calls between the two have focused on North Korea. Abe is likely the most consulted, if not the most influential foreign leader, in Trump’s North Korea policy­making.

Both Japan and the U.S. do not want to see a nuclear­-armed North Korea with accurate and far­-reaching strike abilities. Denuclearization is both countries’ ultimate goal. However, their priorities and considerations in the process of achieving this end have underlying differences. Other than distracting American attention away from economic issues, Abe is using the North Korean threat to advance his long­-term domestic political agenda—Constitutional revision, or in his view, the “normalization” of Japan through military means. The support of any U.S. president, even one as flawed as Trump, is critical to Abe’s program.

Abe is now binding the relationship further by mirroring Trump’s rhetoric. The Prime Minister stated at a Wall Street Journal event in Tokyo on May 16: “I am the prime minister of Japan, so I favor a ‘Japan First’ policy, but Japan will also work with other countries for global prosperity and peace.” Abe’s advisors, assume that Trump will only hear the catch­phrase “Japan First” and believe that it is a positive reflection on himself. Trump will ignore the second part of the sentence where Japan goes its own way.
at May 24, 2017