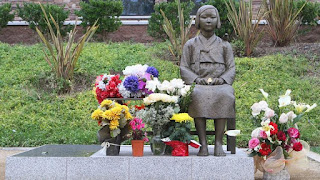 OSAKA – The U.S. Supreme Court on Monday refused to hear a case calling for the removal of a “comfort women” statue in California, ending a three-year legal challenge brought by U.S. plaintiffs supported by the Japanese government. [See: Global Alliance for Historical Truth]*

The court’s decision not to review the case was applauded by U.S. politicians involved with the issue and civil rights groups.

Statues like the one in Glendale, California, are meant to represent women who were forced to work in Japanese wartime military brothels.

“By remembering the past, including the women who suffered immensely, we help ensure these atrocities are never committed again,” said U.S. Rep. Ed Royce, Republican Chairman of the House Foreign Affairs Committee. “Now that the highest court in the land has spoken, I hope those who’ve wasted years trying to rewrite history will finally move on.”

Phyllis Kim, Executive Director of the Korean American Forum of California, said U.S. cities and states have a right to remember “grave human rights violations” and include them in textbooks.

“The Japanese government, in its efforts to deny, downplay and erase the dark history of its war crimes, has publicly supported this shameful lawsuit,” she said.

The Glendale memorial is meant to represent comfort women of all nationalities, and is dedicated “in memory of more than 200,000 Asian and Dutch [and other European and American] women who were removed from their homes in Korea, China, Taiwan, Japan, the Philippines, Thailand, Vietnam, Malaysia, East Timor and Indonesia, to be coerced into sexual slavery by the Imperial armed forces of Japan between 1932 and 1945.”

The Japanese government supported Glendale area residents who went to court in a bid to have the statue removed.

*Koichi Mera, head of the Global Alliance wrote on his organization's website on March 27 that he will "explore another way/other means" to remove the Glendale Comfort Women statue now that the U.S. Supreme Court dismissed their case. This comes a year after Ms. Mio Sugita who often speaks at his organization's events said that she wanted to blow up the statute.
One wonders what this way might be
at April 02, 2017