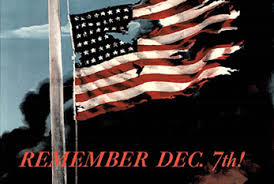 December 7 - 74th anniversary (1941) of Imperial Japan's surprise attack on Pearl Harbor
Pearl Harbor Day honors the 2,400 people who died when the Japanese attacked the base in Hawaii on Dec. 7, 1941, which brought a war being fought largely in Europe to U.S. soil. Flags will be flown at half-staff at government locations to honor those who died, and many homes across the country will display the American flag.


A ceremony will be held Monday afternoon in Washington at the National World War II Memorial. In Honolulu, the annual Pearl Harbor Memorial Parade will extend a mile through the city Monday evening.

Many of the day's events from Pearl Harbor will be live-streamed at pearlharborevents.com, Participants will be able to ask questions about the attack from National Park Service experts.

In addition, the live-stream will show a special commemoration of the sinking of the USS Oklahoma with the loss of 429 crew, and observe interment in the hull of the USS Arizona of an urn with the ashes of Joseph Langdell, a former ensign on the ship. The events are sponsored by the park service, the U.S. Navy and the Pacific Historic Parks.

On Tuesday, a dive to the wreck of the USS Arizona by a Pacific National Monuments cultural resources chief will be broadcast live, and people can ask questions through Facebook.