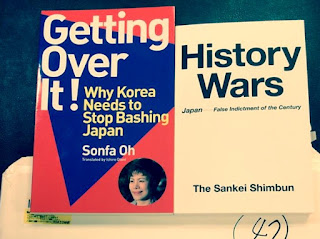 By William Underwood, a Sacramento-based writer, completed his Ph.D. at Kyushu University while researching reparations movements for forced labor in wartime Japan. He is an APP member.

I moved to Japan for the first time in 1991, the year the Cold War ended. The wave of democratization in Asia and new focus on human rights raised expectations about unresolved issues of historical justice related to World War II.

I returned home to California in 1993, which saw the election of Japan’s first non-Liberal Democratic Party (LDP) prime minister in four decades. Morihiro Hosokawa declared in his inaugural press conference that his nation had waged “a war of aggression, a war that was wrong” — an observation both self-evident and unprecedented for a Japanese leader.

The Murayama Statement of 1995, coming 50 years after the war’s end during the brief tenure of Japan’s only socialist prime minister, still represents the clearest apology for Japanese war conduct. The LDP soon regained power in Tokyo, and the fleeting window of Japanese contrition began sliding shut.

Entering 2016, two decades of incremental historical revisionism have trickled down from Japan’s national leadership into much of Japanese society, poisoning the geopolitical well across Northeast Asia — and beyond.

This negative spillover can be seen in Japan’s stepped-up campaign against a proposed “comfort women” memorial in San Francisco, an effort that has included the LDP-linked mass mailing [by the FujiSankei communications company] of two polemical books to Bay Area lawmakers, academics and journalists [as well as members of congress, policy officials, think tankers, and journalists in Washington and across the country].

Getting Over It! Why Korea Needs to Stop Bashing Japan portrays Japan’s brutal colonial rule of the Korean peninsula from 1910 to 1945 as innocuous and even benevolent. History Wars: Japan — False Indictment of the Century, published by Japan’s most influential conservative newspaper [Sankei Shimbun and written by Sankei Washington reporter Komori Yoshihisa], features a subchapter called “‘Anti-Japan Base’ in San Francisco” alleging a plot masterminded by Beijing.

Such well-connected invective makes yesterday’s diplomatic breakthrough between Japan and South Korea on the comfort women issue all the more remarkable. The foreign ministers of the two nations announced in Seoul on Monday a “final and irreversible resolution” to the long-running impasse, consisting of a new Japanese apology and promise to pay $8.3 million for the care of the dwindling number of Korean women coerced into providing sexual services to the Japanese armed forces. The agreement was unexpected because Japanese Prime Minister Shinzo Abe has for years staunchly refuted a 1993 finding by the Japanese government that its wartime military had been directly involved in organizing the forced prostitution enterprise.

Yet until recently, historical awareness at the community level within Japan was relatively enlightened.

I moved back to Japan in 1997 to teach at a university in Fukuoka, after finishing a master’s degree in political science with a thesis on the Japanese American redress movement. When I later entered the Ph.D. program at Kyushu University (a former imperial institution whose medical school had vivisected eight American airmen in 1945), I assumed a WWII-related dissertation would be out of bounds.

But Professor Ishikawa steered me straight toward the war and its lingering legacy. Kyushu had been the backbone of Japan’s wartime coal industry and, for the 11 years I lived there, Fukuoka was a center of vigorous redress activities for forced labor involving Chinese, Korean and Allied POW victims. These movements became my dissertation topic.

It turned out that Ishikawa was born — and orphaned — in the war’s final year; his schoolteacher father had been drafted into the Imperial Japanese Army and dispatched to his death in China. Ishikawa came of political age during the Japanese student movement of the 1960s, which opposed the Japan-U.S. security treaty, the Vietnam War and aspects of society seen as remnants of the prewar establishment.

The energy and commitment of progressive Japanese citizens concerning a wide range of war responsibility issues was surprising and impressive. Younger Japanese, however, were mostly absent from redress work.

The “Japan and America” course I taught confirmed that Japanese college students were, at best, a blank slate when it comes to history of the Asia Pacific War. My students and I explored the American firebombing of nearly all major Japanese cities late in the war, as well as Japan’s far longer list of transgressions.

One student, upon learning of the 25-percent fatality rate for Chinese workers at the Mitsubishi coal mine in her small hometown, reported: “I live there and didn’t know anything about it.” Another student, a female in her early 20s, more disturbingly informed me that the comfort women were “all prostitutes,” basing her conclusion on Japan’s revisionist comic books that sell briskly among all ages.

Generational turnover bodes ill for Japan’s willingness or ability to address the persistent, legitimate historical grievances of its neighbors. So does Abe’s increasingly nationalistic premiership. Most sitting cabinet members are supporters of Nippon Kaigi (or Japan Conference), an emperor-centric lobbying group that basically contends that any Japanese remorse about WWII should be limited to the outcome.

Last spring, an “Open Letter in Support of Historians in Japan” circulated globally among Japan specialists in response to rising revisionism. Last month, the LDP announced it will “scrutinize” the verdicts of the Tokyo war crimes trials of the late 1940s, said to have produced a “poorly constructed perception of history.”

Japan and South Korea’s fresh accord on the comfort women, while surely welcome, belies the reality. There will be little room for redress-receptive voices within Japan’s new history.
at December 30, 2015