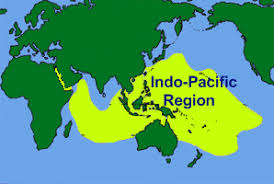 Over the past few months, the phrase "Indo-Pacific" has begun to overtake "Asia-Pacific" in referring to Asia. As the article from APP's Australia National University's members show, the origin of the phrase is Australian.


With the release of the Defence White Paper 2013 on 3 May, Australia officially has a new region, the ‘Indo-Pacific’: a strategic arc ‘connecting the Indian and Pacific Oceans through Southeast Asia’.

Given the long history of linking Australian foreign policy to the ‘Asia-Pacific’, this is a significant change in terminology. How did we get to this point and what are the implications?

The ‘Indo-Pacific’ is not a new term in Australian debates. According to the Lowy Institute’s Rory Medcalf, the ‘Indo-Pacific’ was used in the 1950s to discuss decolonisation in the 1960s at two seminars held by the Australian Institute of International Affairs and the ANU, and again in the 1970s [1]. Yet for around 30 years the term was not prominent until its re-emergence in 2005 in a paper by the Institute of Southeast Asian Studies’ Michael Richardson who saw the inclusion of India, Australia and New Zealand in the East Asia Summit (EAS) as symbolising a more unified ‘Indo-Pacific’ region.

The term ‘Indo-Pacific’ subsequently started to appear in Australian foreign policy discourse, including speeches by Minister for Defence Stephen Smith [2] and Department of Foreign Affairs and Trade Secretary Peter Varghese [3]. But it remains contested, and there was significant debate around the wisdom of adopting the concept.

Proponents of the term have argued that it realistically describes the region in which Australia is situated. Rory Medcalf views the Indo-Pacific as ‘a valid and objective description of the greater regional system in which Australia now finds itself’. In his book There Goes the Neighbourhood: Australia and the rise of Asia, Michael Wesley writes that the concept emerged due to the reality of growing economic and strategic links through Asia: what he terms the ‘Indo-Pacific power highway’.

At the same time, there has been criticism of adopting the Indo-Pacific concept too readily. For example, Nick Bisley and Andrew Phillips have expressed concerns about what the term means and whose interests it serves; it should not be code for ‘dialling up Australia’s alliance commitments to 11’ [4].

The debate between these two camps was fairly even until May 2013 as the Indo-Pacific was not yet embedded into foreign policy. The 2012 White Paper on Australia in the Asian Century mentioned the concept only twice. This was a long way from giving the concept official endorsement.

This situation changed with the Defence White Paper 2013 [5]. Presenting the Indo-Pacific as a ‘logical extension’ of what the 2009 Defence White Paper called the ‘wider Asia-Pacific region’, the 2013 White Paper adopts the concept and ‘adjusts Australia’s priority strategic focus to the arc extending from India though Southeast Asia to Northeast Asia, including the sea lines of communication on which the region depends’. The White Paper sets ‘a Stable Indo-Pacific’ as one of Australia’s four key strategic interests, making the capacity to ‘contribute to military contingencies in the Indo-Pacific’ one of the Australian Defence Force’s four principal tasks. It is hard to imagine a fuller incorporation of the concept into a government policy document.

There are a number of implications of adopting an Indo-Pacific worldview.

First, Australia will need to assess the implications of the Indo-Pacific concept for its key relationships with the United States and China; in particular, whether adopting the Indo-Pacific concept may be perceived to tie Australia closer to the United States and alienate China. Early indications of China’s response to the 2013 White Paper were positive — it seems the term ‘Indo-Pacific’ is less of a concern to China than the characterisation of China as a potential threat [6].

Second, Australia must consider how to build relationships with Indo-Pacific powers as it adopts the Indo-Pacific concept into its foreign policy. Australia will need to engage strongly with many other regional players, for example India, Indonesia, Japan, South Korea, Vietnam, Thailand and key African countries, as well as China and the United States. This could include security dialogues and operational cooperation.

Third, Australia will need to invest time and effort in building Indo-Pacific institutions. These institutions include the Indian Ocean Rim Association for Regional Cooperation (IOR-ARC) and the EAS. Given that Australia is set to take over the chair of IOR-ARC in late 2013, it is well-positioned to promote greater facilitation of regional cooperation. The EAS also includes the major Indo-Pacific powers, providing a space for cooperation and discussion of regional issues. The EAS has been reported to be a key part of Australia’s foreign policy as part of a ‘six + two + N’ formula for setting priorities [7]. This suggests that Australia’s multilateral focus is increasingly turning towards Indo-Pacific institutions.

The adoption of the Indo-Pacific concept in the Defence White Paper 2013 may have surprised some observers. Many other Indo-Pacific powers are in a similar position to Australia; this means that Australian debates receive attention for indications of how others will respond to similar forces. As something of a bellwether state, Australia’s new conception of its region as the Indo-Pacific will not go unnoticed.

Melissa Conley Tyler is National Executive Director of the Australian Institute of International Affairs [8]. Samantha Shearman is a Research Intern at of the Australian Institute of International Affairs. The views expressed in this paper are the authors’ own. This piece is an abridged version of an article which will appear in the proceedings of the Asian Relations Conference IV ‘Geopolitics of the Indo-Pacific Region: Asian Perspectives’ published by the Indian Council of World Affairs [9].

[6] China as a potential threat: http://www.smh.com.au/opinion/politics/softer-tone-but-china-wariness-remains-20130503-2iyhx.html