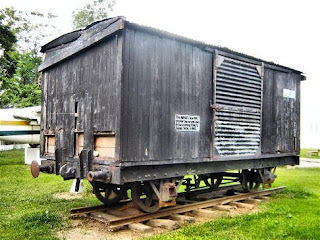 Today, April 9th, is Araw ng Kagitingan in the Philippines. It is a national day of observance to commemorate the fall of Bataan during World War II

On April 9, 1942, Gen. Edward P. King surrendered the Luzon Force in Bataan to the 14th Imperial Army under the command of Lt. Gen. Masaharu Homma. The surrendered men were ordered to gather in Mariveles, Bataan.

The Filipino and American soldiers were then forced to form columns of 100 to 400 men. These columns, guarded by Japanese soldiers, were forced to march 65 miles to the train station in San Fernando, Pampanga.

The Death March lasted for seven 15-hour days (for some it was 14 days) in the tropical sun with no food, water, medicine, or rest. The Japanese guards berated, beat, beheaded, bayoneted, buried alive, raped, and shot both Americans and Filipinos at will.

When they reached the town of San Fernando, the POWs were herded into 40’x8’ French-made boxcars (photo above), packed so tightly they could hardly move. Men gasped for air in the rising heat and died standing up. Those who survived the four-hour ride had to stumble another six miles to reach their destination, Camp O’Donnell. Hundreds died en route, thousands in the camp itself.

This forced march was later memorialized as The Bataan Death March. It still symbolizes for Filipinos and Americans the greatest example of patriotic sacrifice, heroism and man's inhumanity to man. It remains one of the greatest war crimes in modern memory.
at April 09, 2010