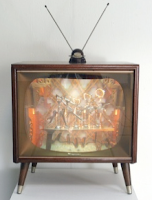 If the Democratic Party of Japan were a TV pilot, it's unlikely a second show would ever get made.
The latest series of ratings finds that the Japanese public are again turned off politics. After a brief period of euphoria following the DPJ election last fall, voters continue to be appalled at the perceived policy ineptitude of the ruling DPJ.
The administration of Prime Minister Yukio Hatoyama does not engender confidence and seems to be plagued by the same money politics as the LDP. Meanwhile on the other channel, the LDP is losing sponsors and cohesion under its President Sadakazu Tanigaki.
All polls show the public approval rate for the Hatoyama Cabinet dropping precipitously. It slipped 8 points in the latest (April 5) Yomiuri poll
at April 09, 2010