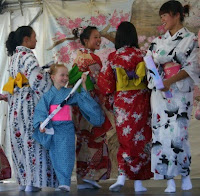 Every year the Heritage Foundation holds a forum on congressional views of Asia and possible policy initiatives. It is one of the best and most interesting events held on Asia in Washington. The announcement, unfortunately, was left out of our newsletter. We urge you to attend or at least watch the webcast.

This coming Saturday, March 10th, in downtown Washington, DC, the largest Japanese spring festival is held outside Japan. The 50th ANNUAL SAKURA MATSURI JAPANESE STREET FESTIVAL begins shortly after the Cherry Blossom parade ends and features, arts, crafts, performances, food, and a beer garden (where you will find the APP interns, ask for Milton and Michael).
at April 06, 2010

Email ThisBlogThis!Share to TwitterShare to FacebookShare to Pinterest
Labels: Congress, This Week in Washington, US Foreign Policy