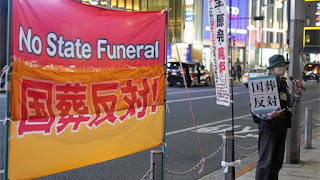 Sharp antagonisms marked the state requiem for Japan’s late right-leaning former prime minister Shinzo Abe. Not attending were Japan’s Emperor and Empress, the main opposition leaders, or any of the G-7’s top leaders. Across Japan, protesters against spending tax money for the ceremony chanted “No state funeral. In his condolence speech, Prime Minister Fumio Kishida praised Abe, quoting a sentence in English, “Courage is doing what is right.” The national ceremony did resolve these feelings and  unexpectedly revealed deep divisions within the nation.

In 1947, the State Funeral Order that determined the Rites for an Imperial Funeral was abolished. Thus, today, there is no legal basis for holding a state funeral. The only exception was the one in 1967 for Japan’s former prime minister Shigeru Yoshida. It too prompted a public discussion on the pros and cons of holding a state funeral. The result was a consensus urging the government to promote further debate for future state funerals. The rest of the funerals of former prime ministers, including Nobel Peace Prize laureate Eisaku Sato or Supreme Order Yasuhiro Nakasone, were held as public ones, although the government paid for them.

Kishida raised four reasons to have the state funeral for Abe: (1) the longest period as a premier; (2) distinguished achievements in restoration from Great East Japan Earthquake, revitalization of Japanese economy, or strategic diplomacy based on Japan-US relationship; (3) broad condolences from overseas; and (4) showing firm opposition against undemocratic violence during the national election. But there are contradictions with each.

In terms of the length of the term, however, Eisaku Sato held office the longest at the time among post-war prime ministers. The restoration policy of the great earthquake originated from the previous Democratic administration. The current growth of the Japanese economy has not surpassed that in the 1960s, 70s or 80s. The most Americanized prime minister may be Nakasone, who called the Japanese archipelago an "unsinkable carrier." And frankly, the volume of foreign condolences or violence in an election campaign should not determine who is worthy a state funeral.

Kishida insisted that his decision was legally correct, quoting Cabinet Office Establishment Law. Article 4 of the law determines the businesses of the office and Section 3-33 of the article refers to “official works related to the rituals of the nation or the Cabinet.” That is it. There is no evidence that “the rituals” include legally baseless state funerals. The law is nothing more than determining the jobs of the Cabinet Office and has no power to decide what the national rituals are. It may not be Kishida, but his cabinet staff who distortedly interpreted the law.

A state funeral of a national leader should appeal to uniting the nation or legitimacy of power transition. However, Abe’s state funeral did not display unity, but fostered division. The leaders of the main opposition parties refused to join the event. They were frustrated with the process of having the funeral without consulting with the Diet.

Retributive sentiment of the assassin, Tetsuya Yamagami, revealed Abe’s close relationship with the Unification Church, which has been known for its coercive activities of “spiritual sales.” News reports found that Abe distributed the voters of the Unification Church to some candidates of the Liberal Democratic Party in past national elections. Most protesters on the streets realized that Abe would not fit for a state funeral, because of his inappropriate relationship with such an antisocial organization.

Kishida could not anticipate the state funeral of Queen Elizabeth II of Britain before Abe’s. A number of the heads of state gathered in London to show their deepest condolences. The guests included US President Joe Biden, French President Emmanuel Macron, and even the Emperor of Japan, all of whom did not attend Abe’s state funeral. Although the British people formed miles-long queues for mourning the deceased national mother, the Japanese people only made long lines offering flowers as well as demonstrations against the state funeral. The contrast between the UK and Japan may have hurt the sentiment of nationalists in Japan.

Probably worried about his declining support rate, Kishida ignored law and tradition to use Abe’s funeral to publicize his diplomatic strengths. He explained that the funeral would be a good opportunity to meet with world leaders. Kishida reconfirmed Japan’s role in the Indo-Pacific by meeting with US Vice President Kamala Harris and accepting condolences from Indian Prime Minister Narendra Modi. However, no actual foreign policy advances were realized among these short greetings of condolence diplomacy. For addressing the world order threatened by Russian aggression in Ukraine or the unilateral advances of China in the Pacific region, annual General Debates of the United Nations General Assembly the preceding week in New York may have been a more meaningful opportunity.