Japan Finally Gets The G2 It Wants 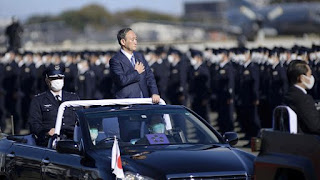 When Prime Minister Suga Yoshihide walks into the Oval Office of the White House on April 16, he will not only be the first foreign leader to meet President Joe Biden. The Japanese leader will showcase the Biden administration’s central foreign policy goal – to challenge and encircle China.

“We need Japan at the center of our grand design for Asian security, and we are going to get it,” says Columbia University Emeritus professor Gerald Curtis, the doyen of American Japan hands.

For the Biden team, the visit is intended to give a vote of confidence in the current government in Tokyo. But they also are well aware that Suga may not succeed in lengthening his stay in office. Their goal is to give Japan an unusually high status in their Indo-Pacific strategy.

A new G2 is formed

For the bureaucrats in Kasumigaseki and for the politicians in the Liberal Democratic Party who hope this will lead to an election victory, this is a triumphant moment. For years Japanese government officials have been working to block the formation of a G2 – a dreaded axis of China and the U.S. that would leave Japan by the wayside. Now the G2 has finally arrived, only it is not the one they feared – it is a G2 of the US and Japan.

The target of this strengthened alliance was clear in the recent 2+2 statement issued by the Japanese and U.S. defense and foreign ministers which for the first time named China as the central shared threat and mentioned areas of potential joint action ranging from democracy promotion to the securing of “peace and stability in the Taiwan Strait.” Some American policymakers see Japan now as having turned a strategic corner, no longer so careful not to offend Beijing and the Chinese Communist Party (CCP) leadership.

“I think that Japanese leaders are coming to the conclusion that they can no longer afford not to respond to the CCP's sustained campaign of cooption, coercion, and concealment,” General McMaster, whose book on grand strategy will shortly be published in Japan, told Toyo Keizai.

“If like-minded liberal democracies do not counter China's efforts to promote its authoritarian mercantilist model, Japan could become isolated and the world would be less free, less prosperous, and less safe.”

Increasingly U.S. defense officials envision Japan, based on its revised interpretation of the right to collective self-defense, playing a security role well beyond the boundaries of Japan itself.

“It is essential that from the Himalayan frontier to the South China Sea to Taiwan to the Senkakus, that the PLA [Peoples Liberation Army] understands that it is unable to accomplish its objectives through the use of force,” argues McMaster. “Strengthening the SDF [Self-Defense Forces] is an important part of the effort to ensure deterrence by denial across the region.”

American officials insist that the anti-China approach, which is expected to be repeated in the statement issued out of the Suga-Biden meeting, is coming as much, if not more from the Japanese side.

“They were the ones who wanted that strong language in the 2+2 statement,” a knowledgeable U.S. defense official told me. He credited Defense Minister Kishi Nobuo, and Vice Minister Nakayama Yasuhiro, for this push, calling them “China hawks,” backed by Kishi’s older brother, former Premier Abe.

But this victory for Japanese conservatives comes with a cost. Tokyo will have difficulty delivering what Washington wants in multiple areas, beginning with human rights, but also in the realm of defense, and the push by the Americans for trilateral cooperation with Korea.

“There are questions about how far Japan will be able to go in almost all the areas,” says Schoff. The Biden administration, adds Professor Curtis, “is set up for a lot of disappointment.”

The most visible gap between Tokyo and Washington is over the Biden administration’s desire to put human rights at the center of its China strategy, framing the contest as one between ‘democracy and authoritarianism.’ China’s crackdown on democratic rights in Hong Kong and its oppression of the Muslim Uyghur minority are at the forefront of this drive, along with opposition to the military coup in Myanmar.

The Suga administration has dutifully joined in rhetorical protests over these human rights violations but it has also pointedly refused to join in punitive sanctions adopted by the U.S. and others. Japanese firms such as Muji are not halting purchases of cotton grown by Uyghur prisoners or curbing investments in Myanmar.

“When it came to being tough with China on the Uyghurs, where was Japan? Hiding in a corner,” notes Curtis.

Defense synergy – but less than meets the eye

The area of greatest synergy between Tokyo and Washington these days is defense and security. Japan’s readiness to broaden its security realm beyond the home islands is welcomed in the U.S., manifested in deepening partnerships in Southeast Asia with Indonesia and Vietnam, as well as with the Quadrilateral security dialogue partners Australia and India. The steady growth of defense spending and acquisition of American hardware like the F-35 5th Generation fighter facilitates hopes for closer operational coordination between the U.S. and Japanese military forces.

The inclusion of the Taiwan Strait in the list of joint security concerns – for the first time since former Prime Minister Sato Eisaku’s famous speech to the National Press Club in 1969 – raises expectations that Japan might be ready to deploy forces with the U.S. in response to Chinese use of force. Japanese hardliners are eagerly feeding this with talk of ‘red lines’ around Taiwan.

Some American defense planners echo that idea. But knowledgeable American defense experts caution against this expectation. Japan might be ready to provide logistical support to American forces, with Okinawa only a short distance from Taiwan, but the main goal is to bolster the deterrence of China.

The realities of Japan’s domestic political restraints and its delicate balancing act with China make even that scenario unlikely, says Columbia’s Curtis.

“The idea that Japan is somehow going to step up to the plate and do something significant – NO,” he says. “They are very careful to signal to China that they are not linking up in a new position on Taiwan.”

Pentagon officials have even more ambitious goals in mind for Japan, reflecting the G2 spirit. Admiral Philip Davidson, the head of the U.S. Indo-Pacific Command, told the U.S. Congress earlier in March that there is a dangerous “erosion of conventional deterrence” in the region.

Under the umbrella of a new Pacific Deterrence Initiative (PDI), with $27 billion in funding, he envisions fielding “precision-strike” networks of land and sea-based missiles, paired with missile defense systems and air and naval aircraft, “along with the First and Second Island Chains.” While it is still in the planning stage, this includes new long-range missiles based in Japan as well as in Guam and other Pacific islands.

But will Japan agree to this? For now, says recently retired Army General Thomas Spoehr, now with the Heritage Foundation, “there is probably not one of our regional partners in the first island chain that would be willing to base… long-range strike missiles in their country.”

Trilateral cooperation and beyond

The most challenging area for the G2 may be forging real trilateral security cooperation with South Korea. The Biden administration approach, for now, is a familiar one – to use the threat of North Korea to push Japan and South Korea back into some kind of functional relationship.

The meeting of the national security advisors this week is a start in that direction, to be followed later in April with a trilateral foreign ministers meeting. But privately U.S. officials admit that the atmosphere between Seoul and Tokyo is so sour that it may not permit much more than superficial agreement.

The attempt to separate security issues from the history and legal battles over forced laborers and comfort women reflects frustrations in Washington with both allies. There is considerable unhappiness with South Korea for creating the depth of the problem but there is also dissatisfaction with the Suga administration’s unwillingness to discuss problems without Korean concessions first. “It’s not going to be fixed,” a former senior official close to the administration told me. “It’s not going to get much better and it could get worse.”

Ultimately, American experts warn that despite the triumphant talk, Japan is simply not prepared to be the central pillar of the American strategy for Asia. Japan prefers to part of larger groupings – not only the Quad but wider multilateral structures. Groups like the G7, which could be expanded to include India and even Korea, make more sense to many Japanese policymakers as a vehicle to compete with China.

For Tokyo, the goal is to diversify its security and diplomacy, not to hang everything on the American alliance. While it welcomes Biden’s talk of the return of American power and leadership, “Japan cannot rely on the U.S. in a G2 dynamic because we are too mercurial and unstable in some ways politically,” says Schoff.