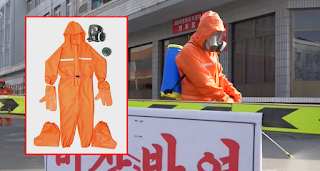 The North Korean announcement that they would not participate in the Summer Olympic Games in Tokyo was undoubtedly disappointing news for both South Korea and Japan. The South Korean government hoped to use the Games as a platform to reinvigorate its desperate efforts at engagement with the North. For Japan, the danger is that this may be a harbinger of other dropouts, also citing Covid-19 fears.

The North Korean move, however, should not have been a shock. The Olympics decision is only the tip of an iceberg of troubles that have been surfacing in recent months. At the top is the pandemic which triggered the shutdown of almost all cross-border trade and exposed a health system incapable of dealing with the spread of the virus.

Underneath is an economy crippled by systemic failure and international sanctions which have shut off much of the regime’s precious hard currency revenue. Least visible, but most dangerous, is the spread of anti-regime feeling, prompting a tightening of internal controls and a fierce ideological campaign to stamp out potential resistance.

There is significant evidence of this mounting crisis, gathered from recent defectors, anecdotal reports coming out of North Korea, and the just-released annual report of the United Nations Panel of Experts to the UN Security Council. But the clearest confirmation comes from the regime itself which, since the congress of the Korean Workers’ Party in January, has been frankly acknowledging its failures.

On April 7, North Korea’s supreme leader Kim Jong Un called on the ruling party to face “the worst-ever situation in which we have to overcome unprecedently numerous challenges.”

Last week’s meeting of party cell leaders, the network of party officials down to the smallest units of North Korean economic and social life, featured Stalinist style exhortations to increase production and calls to counter disaffection in the population. “The party cells should be the first movers in actively sweeping away anti- and non-socialist practices and launch an intensive drive for establishing moral discipline,” a North Korean news agency reported.

In his closing remarks to the party gathering, Kim called on the party to “wage another more difficult ‘Arduous March’,” referring to the famine of the mid-1990s, clearly worried that the party was losing its legitimacy with the beleaguered North Korean population.

Official propaganda provides evidence of shortages and a breakdown of key sectors of the economy, cut off now from spare parts and other inputs. The huge chemical fertilizer plants in Hamhung and Anju are no longer working properly, with efforts to make up the gap with transports of “urban manure,” a polite euphemism for human waste, to collective farms.

The regime has cut the enlistment period for the military from 10 to 7-8 years because the military is short of rations, reported Daily NK, which has provided reliable accounts from inside North Korea. Released soldiers are being rerouted into work assignments in mines and factories.

Foreign diplomats and aid workers are fleeing Pyongyang, where conditions are relatively better. A departing Russian Embassy staff member wrote on Facebook about “the sharp deficit of essential goods, including medicine, and the lack of any possibility to resolve health problems.”

“North Korea’s decision not to attend the Tokyo games is a health and a political one,” said a Western aid specialist with long experience in North Korea, “and to me, not surprising.” There are only a handful of Westerners left in the country, the aid worker told me. “Direct contacts with North Koreans have become very difficult and nobody really knows what’s going on.”

Anecdotal information from the border region with China provides some sense of the deepening deprivations. “There is barely any food going into the country from China for almost two months now,” a missionary who clandestinely helps people in need inside North Korea told Lina Yoon, a researcher for Human Rights Watch, last September.

“There are so many more beggars, some people died from hunger in the border area and there’s no soap, toothpaste, or batteries.” Without AA batteries, households can’t even keep track of time, he said. Their clocks have died.

The border closure that began more than a year ago, designed to head off the pandemic, has accelerated the breakdown of the command economy and also undermined the operation of the parallel market economy that had filled the gap for North Koreans.

At the party congress in January, Kim Jong Un and his leadership signaled a partial retreat from the market and a return to state-run planning, accompanied by tighter controls over a populace infiltrated by information and ideas from the outside, mostly via China.

The country’s economy is shrinking, with little investment and severe shortages of imported parts and materials for production, Brown wrote recently.

“Basic food supplies appear to be sufficient to ward off famine but much of the population is suffering from the lack of the most basic comforts, usually imported from China, while a few entrepreneurs appear to get rich, bribing officials who are paid next to nothing by the regime. And after eight years of currency and pricing stability, much volatility is now seen, creating a speculative environment for cash. A troublesome brew to be sure.”

Some relief may be on the way as there are signs of preparations to reopen border trade with China, though perhaps not imminently. Even then, “they are afraid to open the border with China not because of the virus but because they are afraid of the outflow of dollars, RMB, and maybe people,” Brown told me.

There is some debate among North Korean watchers about the impact of the Covid-19 epidemic on the country. Claims that there are no cases of infection are dismissed by experts and it is also evident that the regime is terrified of the spread of the disease.

A senior U.S. military official in South Korea with regular access to the Joint Security Area in the Demilitarized Zone, where North Korean soldiers usually patrol, told me that the North Korean personnel have largely retreated into their complex. When they emerge, the North Koreans are dressed in full orange-colored hazmat suits and there has been no face-to-face contact with them since January 2020.

In interviews that this official conducted in recent months with two lower-level defectors who crossed the border mainly because of economic deprivation, they recounted widespread scare theories spreading in North Korea, including that the disease could be passed from consuming fish.

Despite these health fears, the regime has refused to talk with South Korea or international agencies which have offered humanitarian health-related assistance. It has contracted to receive vaccines from the World Health Organization’s global program but it is not ready to admit international personnel.

Instead, the UN Expert panel report says, the regime focused on “white elephant” projects like the construction of a showcase hospital in Pyongyang.

“Construction was started, apparently, without a comprehensive plan for even completing the building,” the UN report, issued last month, said. “Construction was rushed to meet an artificial political deadline (which it did not meet). Also, the regime began construction without securing the equipment and supplies needed to run it.”

The sanctions are hurting

The ‘worst-ever’ conditions are underlain by the impact of international sanctions, particularly since broader restrictions were imposed after 2017 by the UN Security Council.

According to a recent defector who served as a high-level North Korean official closely involved in global money-earning operations, these sanctions have actually been surprisingly effective. A number of African countries which had been long-time buyers of North Korean arms and employed their workers – including doctors, engineers and construction laborers – cut off their connections under UN pressure, beginning in late 2017.

Countries such as Namibia, Uganda, Angola and Guinea shut down these flows of money to Pyongyang under Western pressure, sending Kim Jong Un into ballistic displays of anger at what he saw as acts of betrayal, the former official recounted to a small group of American specialists recently.

The UN sanctions shut down the revenue flow from thousands of North Koreans deployed as laborers in Russia and the Persian Gulf. Some 35,000 such workers, whose earnings went to the regime in large part, left in the last 2-3 years, the defecting official says. They were employed on construction sites, in factories and even as cooks and restaurant workers.

The remittances were transferred to North Korea via elaborate cutouts where money was wired to exchange offices in China and converted to hard currency for transport into North Korea, where it was used to finance the missile and nuclear programs and prestige projects for the regime like a fancy ski resort.

“All the money ends up in the hands of Kim Jung Un and he uses it as he sees fit,” the former senior official told the experts. “That’s the system they have.”

The defector believes that the sanctions are working. “The country is about to bankrupt,” he says. “I don’t think that the regime is sustainable at this rate.”

That assessment may be more a reflection of a defector’s hopes than a reliable prediction of collapse. The regime has found other ways to survive. The UN report details ongoing sanctions-busting exports of North Korean coal to China, and a flow of oil and other goods coming back in, with levels increasing in recent weeks but not reflected in official trade statistics.

The impact of sanctions on hard currency flows has been mitigated somewhat by extensive cybercrime carried out by the regime’s Reconnaissance General Bureau, its headquarters for cyber operations.

Hacker units under the RGB, such as the Lazarus group, the BeagleBoyz and the Bluenoroff Group have carried out successful thefts from cryptocurrency exchanges and other financial institutions, with revenue from such operations totaling at least $316 million from 2019 to November 2020, the UN report says.

Experts warn against expectations that Kim Jong Un is anywhere close to yielding his grip on power. “Despite pressures, which must be getting intense, Kim likely feels he has keys to solutions and is thus not desperate to negotiate,” Brown told me. He can still play a waiting game and count on China to keep him and his regime in place.

When it comes to the Olympics, however, Kim can always change his mind. “Since Japan and South Korea want them to participate in Olympics, he gets some leverage by withholding his team,” says Brown. The North Koreans, even at the last minute, may “change their minds if they get something in return.”

What won’t change are the underlying problems that have now converged into a “worst-ever” threat to Kim’s rule.