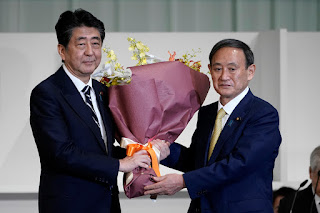 President-elect Joe Biden’s administration has a lot to prove but inherits a relatively strong US-Japan relationship. He will also find Japan is ready to move beyond US President Donald Trump’s “America first” transactional approach to diplomacy. One can imagine Japanese Prime Minister Yoshihide Suga’s quiet fist pump when he learned of Trump’s defeat.

Tokyo hopes Biden will revive US multilateral engagement and provide greater coherence in Washington’s diplomacy but fears Biden might be soft on China. Following his congratulatory conversation with Biden, Suga sought to dampen such doubts by singling out his reassurance that the US-Japan mutual security treaty covers the Diaoyu/Senkaku Islands.

Even so, scepticism lingers that Biden will seek rapprochement with China to the detriment of Japan, a concern former president Bill Clinton ignited a quarter-century ago when he visited China and bypassed Japan.

This underscores how symbolism matters in diplomacy and has implications for Biden’s choice of the next ambassador. Japan favours candidates who have strong political connections to the White House and know little about the nation because they are easier to manage.

It is time to rectify this situation and Glen Fukushima, fluent in Japanese with extensive Japan-related public and private sector experience, is eminently qualified.

Trump shredded the US image with his browbeating of allies and fawning over despots, an improvised diplomacy of blunders and disrespect. Former prime minister Shinzo Abe nurtured a relatively good personal relationship with Trump, but on matters of importance, that goodwill did not seem to have much impact on the president’s actions.

For example, Trump ran roughshod over Japan by withdrawing from the Trans-Pacific Partnership (TPP), the Paris climate accord and the Iran nuclear deal, put sanctions on Japanese exports to the US, instigated a trade war with China that inflicted collateral damage on Japan and threatened to defund the World Health Organisation amid a global pandemic.

He did all this while repudiating multilateralism overall, the mainstay of Tokyo’s diplomacy.

He also played hardball on Japan’s financial support for hosting US military bases, calling for quadrupling the annual subsidy to US$8 billion.

Tokyo slow-walked those negotiations, probably hoping US voters would solve that problem. Biden will probably not take such a hard line but is also unlikely to offer Okinawans a reprieve from the controversial Henoko base construction project they rejected in a 2019 referendum.

To some extent, the Japanese government favoured Trump, mostly because he took a hard line with China and explicitly promised the US would militarily defend the Diaoyu/Senkaku Islands. This went beyond his predecessors’ reassurances that the US would respond according to Article 5 of the security treaty, which does not actually spell out how America would respond.

Trump also earned kudos for raising the abductee issue with Kim Jong-un, but Tokyo worried that his grandstanding diplomacy might lead to a deal on intercontinental ballistic missiles that left some of North Korea’s nuclear arsenal intact. Like many of his gambits, though, fanfare did not produce results.

Much has changed in the US since the Obama-Biden first term when there was an emphasis on engaging China and treating it as a strategic partner.

In 2012, then-president Barack Obama soured on engagement and announced the pivot to Asia, although not much happened in reality. Relations further soured under Trump, and some are convinced the US and China are locked into a cold-war rivalry.

While this might be a misleading comparison, it is clear Beijing’s regional ambitions are seen as threats to an Asian Pax Americana.

A war is being waged on trade, intellectual property and tech, and containing China is one of the few issues receiving bipartisan support in the US. Even if Biden knows there are benefits to hitting the reset button on Sino-US relations, this is virtually impossible.

Statements on the campaign trail are often not a reliable barometer, but Biden denounced President Xi Jinping, lambasted Beijing’s massive lock-up of Uygurs as genocidal and pledged to uphold support for democracy in Hong Kong. This is not exactly music to the Communist Party’s ears.

Biden appears to support the “free and open Indo-Pacific” vision championed by Japan but is less inclined than the Trump administration to nudge the Quad security grouping towards a Nato-like institutionalisation. On trade, he might end Trump’s counterproductive tariffs, but tensions will persist.

After Trump pulled out of the TPP, Abe revived the multilateral pact now called the Comprehensive and Progressive Agreement for Trans-Pacific Partnership. The US is unlikely to join that or the Regional Comprehensive Economic Partnership, where China is the dominant player.

Japanese leaders have misgivings about Biden over trade as they believe Democrats pander to organised labour. They hope Biden will re-engage in Asia’s multilateral processes and revive its battered networks of influence, but the deep hole Trump dug at home will necessitate an inward focus that cautions against hopes of strong and sustained US leadership.

Tokyo wants Uncle Sam engaged as much as possible but worries the US is a declining power. It is thus hedging by expanding its regional security relations and boosting its autonomous capacity as a counter to China’s regional hegemonic ambitions.