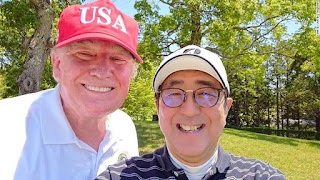 The telephone talk this week between Prime Minister Abe Shinzo and U.S. President Donald Trump was a conversation between two desperate men facing increasingly desperate times. Both leaders' personal political fates are now completely intertwined with a global pandemic that is not only a health crisis but the trigger for a deep economic downturn.

The phone call followed President Trump's declaration in a national address from the Oval Office that the United States faced a "foreign virus," abruptly cutting off travel from most of Europe. The next day Trump suggested that the Tokyo Olympic Games might have to be cancelled, or at least postponed for a year.

A panicked Abe called Washington, hoping for reassurance that Japan was not next on the travel shutdown list, and for Trump's support to keep the Games on schedule. He got that in words, but as is often the case with Trump, they are not likely to mean much.

Witness the treatment of the United Kingdom, which on Wednesday was exempted from the travel ban by Trump, an apparent gesture toward his friend and ally Prime Minister Boris Johnson. Trump then reversed that exemption on Saturday, when the reality of the spread of the virus to Britain was impossible to deny.

"I've heard that Abe is terrified at the possibility of Trump banning Japanese visitors," a senior Japan expert in Washington, who declined to be named, told me. "I am not sure that's true," he said, "but you never know with Trump."

As with Europe, the decision is not likely to depend on any judgment about Abe or how Japan is handling the epidemic, but on whether there are mounting numbers of infections and deaths.

"I think that the decision will be based on the reach of the virus," former Trump National Security Advisor Lt. General H.R. McMaster, told Toyo Keizai. "If there are travel restrictions from Japan, they will not be due to concerns over how the government is handling it, but rather the effort to reduce risk to spread in the U.S." McMaster is currently the Japan Chair of the Hudson Institute and a senior fellow at Stanford's Hoover Institution.

As for the Olympics, that decision first of all depends on global pandemic conditions, not just what is happening within Japan. "On the Olympics," McMaster told me, "I think it will require the identification of the peak not only in Japan, but also globally."

Abe's determination to hold the Games is understandable - it marks the pinnacle of his premiership and its cancellation or postponement, accompanied by a deep recession in the economy, is likely to spell the effective end of his political life. But Abe's desperate attempt to drag Trump into protecting the Games - and himself - is an empty hope.

"Whether or not the Olympics will be held in Japan as planned is not Abe's call, nor is it is Trump's," observes George Washington University Professor Mike Mochizuki, a respected Japan expert.
"It is ultimately up to the IOC (International Olympic Committee). So, if Abe called Trump to try to roll back Trump's off-the-cuff remarks about the Olympics, it's doubtful that it will make a difference in the end. Trump does not have much international credibility at this point, so he is not going to be an effective ally for Abe to lobby the IOC to proceed with the games."

The key issue for the IOC, and for other world leaders, will be whether bringing hundreds of thousands of athletes and spectators to Japan could create a potential new hot spot for the virus.
"Although I fully appreciate the economic and political stake that Abe and Japanese leaders have in the Olympics, the number one priority should be global health and safety," Mochizuki said.

"Japanese leaders should not try to underestimate or underplay the risks because of their keen interest in holding the Olympics. As we approach the summer and temperatures increase, the number of new cases of infections may decrease. But we still need to be extra cautious. The virus could re-emerge in a more virulent form at the end of summer. Remember that the 'Spanish' flu came back with a vengeance in fall 1918, and that is when there was a horrible international death toll."

That view is shared by other Japan experts. "Given that we seem to be nowhere near the peak in most, if not all of the developed world - to say nothing of the developing world - I don't see how Japan will be able to welcome all the athletes, coaches, and spectators that they anticipated for the length of time planned," Tobias Harris of Teneo Consulting and author of a new biography of Abe said.

"Even if Japan were to contain the outbreak, convening the games could easily lead it to spread again. It is difficult to imagine outright cancellation so my guess is either significantly modified - few or no spectators, shorter duration - or delayed for a year or two."

Here in the United States, the coverage of the coronavirus epidemic has focused equally on the health issues and on politics, particularly the widespread perception of the incompetence of the Trump administration and the manifest lack of leadership.

The President's Wednesday night address to the nation proved to be a disaster - it featured a transparent attempt to blame the crisis on 'foreigners,' laced with multiple misstatements that had to be corrected subsequently, along with a failure to address the more crucial questions of the lack of widespread testing and economic assistance for those impacted.

Since the crisis began, Trump and his allies in conservative circles have been mostly content to point fingers of blame at his Democratic opponents, and to issue empty assurances that everything will be better soon.

Even the conservative Wall Street Journal condemned Trump's performance on Wednesday in an editorial the next day. The President "continues to give the impression that he views the virus more as another chance for political combat than a serious public-health problem," the Journal wrote.

The paper politely lacerated the President for an absence of leadership, from the botched roll-out of testing kits and the slow economic policy response, to failing to place the crisis response under the control of experts and instead "putting himself in front of every briefing and speculating about things he doesn't know much about."

The President's Friday declaration of a national emergency and an acknowledgement that tests were not, as previously claimed, widely available, was an attempt at a do-over.

The President was catching up to the rest of the country, which in the last weeks has moved dramatically, under the leadership of state and local governments as well as civil society, to impose drastic steps to mitigate the spread of the disease, including banning almost all large public events and closing universities and school systems.

Still, Trump's insistence that he was "not responsible" for the slow response to the crisis was widely seen as further evidence that he does grasp the role of a President at a moment of national crisis.

The U.S. view of the performance by Abe and the Japanese government is only slightly better. There was widespread criticism of the way the Japanese government handled the Diamond Princess, particularly the decision to keep the passengers and crew onboard rather than have them disembark quickly, be tested and transferred to onshore quarantine facilities. That lesson was learned by the time another cruise ship with infected passengers and crew docked here in the San Francisco Bay area.

"I think there was a lot of concern about Japan's competence during the Diamond Princess fiasco," a senior staff official at the U.S. Senate said.

"But, frankly, Japan has benefited from the fact that so many of the urgent issues have been elsewhere - in China at first, now in Europe - that Japan has managed to side-step any significant attention or criticism. The fact that Japan has also not 'exported' too many cases to the US has also been a plus for management of the issue in a bilateral context."

Still questions remain about the low level of testing in Japan, second only to the U.S., raising suspicions that Abe has wanted to downplay the crisis to save the Olympics. Unlike South Korea, Japan is not seen as a model for how to manage this crisis.

"I think the American public is very impressed with the efficiency and transparency of South Korea's large-scale testing, and the ability of Singapore, Taiwan and Hong Kong to largely contain outbreaks, despite their geographical proximity to China," Mireya Solis, who heads the Center for East Asia Policy Studies at the Brookings Institution, said.

"Japan does not stand out -for good or for bad- in this international comparison, making it less visible to the U.S. public after the cruise ship incident."

Ultimately, Americans are much more focused on the appalling way the Trump administration has handled this pandemic than on Japan's experience. Ironically, given how much Abe seems to still depend on the favors of an increasingly desperate Trump, this works in Japan's favor.

"Criticisms of Japan were certainly justified," said Professor Mochizuki, "but Japan does not look so bad compared to the United States."
at March 19, 2020