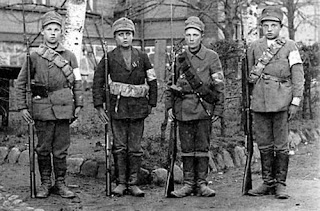 By Caitlin O'Brien, Bachelor of Asian Studies/ Bachelor of Laws student at the Australian National University.

Why do some nations seem to be concerned with conflicts which have since ended? What is historical amnesia? Why is victimhood dangerous to national healing? A brief comparison of China, Finland and the Baltic States illustrates the necessary components for the reconciliation of historical injustice.

With extensive research completed on a nation’s conflict, the area of memory and remembering the conflict in contemporary society is a fascinating and intensely complex field. Broadly, nations would rather emphasise memories which evoke pride rather than those which admit guilt and express shame. Engrained within the difficulty of societies memorialising and remembering their history are the concepts of victimhood, reconciliation and truth. These three ideas are essential to the formula a nation must apply in order to successfully heal and progress from the trauma of historical injustice. This healing is vital if a nation’s identity is to be defined without the formative influence of historical injustice. “There cannot be reconciliation without truth” and essential to truth is accurate identification of perpetrators and victims. So often a victor’s history is told and remembered as fact, but, for societal fissures arising from warring parties to be amended, both sides’ history must be told and remembered.

Perpetuating individuals’ identification with victimhood obstructs reconciliation by delegating responsibility for the conflict and dismissing criticism from other groups. The major impediment to truth-telling and the following reconciliation, victimhood, pertains to the “white-washing” of the recollection of historical injustice which prevents an accurate collective memory being formed. Meaningful and long-term reconciliation requires “a changed understanding of the self and other that transcends the narrow roles of victim and perpetrator.”

“Victimhood” refers specifically to collective victimhood, which is “people’s sense of group-based victimisation by virtue of their identification with (that group), even without having been personally harmed.” “Reminding people of historical… victimisation (reduces) their… collective guilt for their group’s harmful actions.” An example of this is China where the perceived victimisation of Mao’s Cultural Revolution felt by all Chinese absolves the perpetrators from taking responsibility for the injustice they committed at the time. By delegating the perpetrating of the injustice to that of the “regime,” individuals are removed from blame and guilt. China’s acknowledgement of wrongdoing has not surpassed the blame of Mao and his Gang of Four. Until the issue of “victimhood,” where everyone suffered but no-one executed the violence of the Cultural Revolution, reconciliation remains elusive.

The complexity of this case stems from the fact that those who experienced the Revolution all see themselves as victims, not as the perpetrators. Arising from the unpredictable political climate at the time, where one day a person could be a victimiser and the next a victim, and vice versa, reconciliation has been unable to progress due to the ambiguity of who is at fault. Qui criticises this saying that “one can be a victim of the propaganda at the time as well as having the courage to admit that they participated in the cultural revolution as well.” An accurate collective history is not achieved as truth has not been discovered. Thus, the trauma of the Cultural Revolution remains an aspect of national identity as the injustice has not been relegated to the realm of memory.

Finland offers a contrary example where the Civil War of 1918 was unable to be reconciled until the official version of history admitted the crimes and violence of the victors, the White army which resulted in the losers, the Reds, being unable to identify with the public recollection of the war. Only in the nineties, following rapid modernisation in Finland which addressed class inequality, which was a precursor to the civil war, when the public began to discuss the war did individual memories contribute to the collective one, facilitating the progression of reconciliation. This changed the public narrative from the one-sided victorious White’s recollection, to one more representative of the experience of the Whites and Reds.

Public commemoration and memorialisation of both the Red and White experience of the war is central to reconciliation. In the decades following the War, only the Whites could memorialise and grieve their dead in a public setting. The repression felt by the Reds and their descendants prevented a peaceful, harmonious society from developing as deep-seated dissatisfaction felt by the Reds inhibited reconciliation. Through the collection of individual testimonies, encouraged by the new generation’s interest in the war, a revised collective memory emerged that incorporated the victorious narrative, and the darker, violent experience of the Reds and Whites. In 2008, 90 years after the civil war, the conflict was mediated through various forms of memory work and finally relegated the associated emotions surrounding to their original historical context.

“Civil wars in particular give rise to complex memory politics, as they often carve deep wounds into a society’s social memory”. The aforementioned cases were civil wars in the 20th century whose effects are being felt even now.
at February 06, 2020