POLITICS DISGUISED AS FOREIGN POLICY: GETTING READY FOR ELECTIONS IN JAPAN 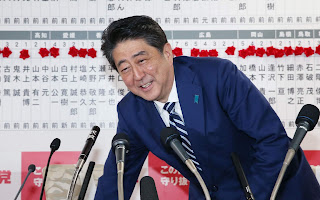 Japanese Prime Minister Abe Shinzo has embarked upon a flurry of diplomacy that has much more to do with politics back home than with foreign policy abroad.

Abe's diplomatic dance began with the hosting of Donald Trump for his Imperial audience. It continues with a visit to Iran on June 12-14, taking a stab at heading off the threat of war in the Persian Gulf, and it culminates at the end of the month with the hosting of the Group of 20 summit in Osaka. In between the Prime Minister has opened the door wide to a meeting with North Korea's Kim Jong Un, and tried to keep the door open as well to a long-sought agreement with Vladimir Putin to end Japan's postwar territorial dispute with Russia.

All of this can be read as yet more signs of a Japan ready, and eager, to play a global leadership role. For Abe, however, it is more important that this be seen as evidence of his personal prowess as a world figure, one whose continued presence in office is now intrinsically linked to Japan's status in the world. Whether this diplomacy yields real results, whether it is avoiding a damaging breakdown in the world trading system or a dangerous war in the Middle East, remains to be seen.

Abe, however, is thinking only weeks ahead. The primary audience for these displays of diplomacy are the Japanese voters who will go to the polls in late July to elect half of the House of Councilors, the upper house of Japan's parliament. Upper house elections tend to favor the opposition--the turnout is lower and the smaller number of single member districts makes it easier for the fractured opposition to agree, as they have done already, to join hands and run only a single candidate. Political experts project a likely decline in ruling party seats, though not enough to threaten their majority.

The ruling coalition of the conservative Liberal Democratic Party and the Buddhist Komei party will continue to dominate Japanese politics. But there is a personal peril in this election for Abe.

If the LDP does poorly, Abe's hopes of getting to a two-thirds majority sufficient to move ahead with long-held dreams of seeking a revision of Japan's pacifist constitution would be effectively dead. Even more seriously, Abe would face a resurgence of opposition from within the LDP where rivals are ready to jump at any sign of weakness. As we saw last year, when a series of corruption scandals hit, there are many would-be prime ministers who are frustrated by Abe's extended rule, now scheduled to go until at least 2021. He is already the third longest serving premier in Japanese history.

These political risks are paired with a growing economic danger - that the Japanese economy is heading into a serious slowdown, if not a recession, fueled by the already evident drop in Japan's global trade. An unresolved trade war between the US and China, and a possible breakdown in trade talks with the US that could lead to American tariffs on Japanese auto exports, could deepen this downturn. Looming in the fall is the planned increase in Japan's national sale tax, from 8 to 10 percent, considered essential for fiscal stability but now another possible trigger for recession.

For these reasons, Abe has been playing around with the option of calling a simultaneous snap election for the House of Representatives, the more powerful lower house of the parliament. A "double election" would bring out a greater turnout, make it far more difficult for the opposition to unite, and favor the better organized and better funded LDP. And this may be the last chance to get out ahead of an economic slowdown.

Double elections are relatively rare in Japanese political history. This has only happened twice, most recently over 30 years ago in 1986. Abe has been searching for a credible excuse to dissolve the Diet for Japanese voters. He was hoping for a diplomatic breakthrough with Russia, or with North Korea, to put before Japanese voters. But without a diplomatic excuse, the possible second postponement of the tax hike is the only ostensible reason to call a double election.

So far, the conventional wisdom among Japanese political reporters has been that a double election is likely, if not inevitable. But most seasoned American observers of Japanese politics, though not all, are skeptical that Abe would risk his leadership of Japan. That may reflect the worries American policy makers have about a Japan without the steady hand of Abe at the helm.

This writer sought out the views of some of the best American experts on Japanese politics about the prospects for both a tax hike and double elections. Among the experts I consulted were the doyen of Japanese politics experts, Columbia University's Gerald Curtis, who is renowned for his close ties to senior politicians; Temple University's Japan-based scholar Jeff Kingston; Tokyo University's Gregory Noble; and Teneo Consulting's Tobias Harris.

"I think chances are better than 50/50 for a double election because the economic news is likely to worsen," Kingston told me. "Abe can come off the Trump summit and G20 striding tall on the international stage while the opposition looks like squabbling Lilliputians, unable to provide any real check. There is a risk of losing a two-thirds majority that would endanger the Holy Grail of constitutional revision, but that risk looks small. None of the opposition parties polls out of single digits. Abe's approval ratings are high, the economy is stagnant but Abe has shrugged off worse news and scandals to win."

A mandate to postpone the tax increase, pending economic results this summer, would be popular, Kingston and others believe. But Columbia's Curtis, who remains the leading American scholar of Japanese politics, took a very different view.

"I see no chance that the consumption tax will be postponed," Curtis told me in a June 4 email. "Abe has said, as recently as yesterday, that the tax increase will go ahead unless there is a Lehman shock level economic crisis. Whether there is a double election is a separate issue. Postponing the consumption tax wouldn't necessarily help the LDP in the election. The opposition would make the plausible argument that it was their pressure that forced Abe to postpone it."

While Abe can find an excuse to call an election, Curtis says, "I think the chances are small that he will do so. The LDP expects to lose seats, though not its majority with the Komeito, in the Upper House. It has to worry that dissolving the lower house and calling a double election will backfire and it will lose a lot of seats in the lower house as well. So, my expectation is no delay in the consumption tax increase and no double election, though I feel more confident about the former than the latter."

Tokyo University's Greg Noble is equally skeptical on both the tax hike and double election front, but he leaves the door open for Abe to do something unexpected - "Abe is not constrained by norms," Noble told me. But the Todai scholar leans against it.

"The smart money--and history--says that all this talk is just idle speculation designed to sell newspapers or confuse other parties," says Noble. "Same-day/dual elections have occurred only twice (1980 and 1986), most recently over 30 years ago, and even then, under very different political circumstances. The current term has a lot of time left, and there's no good reason to call an election. Nor does the public support dissolution now. Moreover, the ruling parties could lose their super-majority and ability to propose constitutional revision. Elections are always risky, and most Diet members would rather stay in office as long as possible. As for using yet another delay in raising the VAT as an excuse, count me among the skeptics."

When it comes to the economy, the Tokyo University scholar notes that there are traditional counter measures available to dampen the effect of the increase on consumption. The economy is slowing but still growing and there may not be any better moment to deal with Japan's fiscal problems. "This is not a particularly bad time to raise taxes," he told me. "Japan's public finances really are in terrible shape, and the credibility of its policymaking would take a severe hit if Abe whiffed yet again."

All that said, American political analysts see the political logic of Abe taking a chance on calling a double election. The main driver for this is to put the opposition on its heels. There is a very fragile agreement among the main progressive opposition parties--the Constitutional Democratic Party, the Democratic Party for the People, the Japanese Communist Party, the Liberal Party and the Social Democratic Party--to field a unified list of candidates in almost all of the 32 single seat constituencies for the House of Councilors. While that move poses a challenge for the LDP, "it does strengthen Abe's reasons for calling a double election," Teneo's Harris told me.

Opposition cooperation in a much larger field for the lower house - there are 289 single seat constituencies - is unlikely. "Having to compete in lower house races while cooperating in upper house races could stretch opposition parties' capacities to the breaking point," Harris believes. "That said, given that there hasn't been a double election in 33 years, it's hard to be certain exactly how the public will respond to one. But I suspect that if Abe's willing to do it, it's less of a roll of the dice than it might seem."

Bottom line is the situation is getting less predictable, even for Japanese political reporters. A senior political reporter who was sure a double election would be held a few weeks ago, now tells me privately that he sees more of his colleagues betting against it. He points out that the Komeito, whose voter base is essential for the LDP, is against holding a double election at this point.

Still, as this writer has learned the hard way, it is always a bad idea to bet against Abe finding a way to win. As Noble points out: "The opposition failed to nail Abe over the various scandals of last year, and right now Abe is back in the saddle, with a support rating of close to 50%, remarkably good for someone who has been in office six and half years...the temptation to crush the opposition yet again will be strong."

As American policymakers get ready for the G20 meeting in Osaka, or for trade talks with Japan, it would be good to have this in their minds. All politics are local everywhere, and all foreign policy is defined by politics, even in authoritarian regimes but especially in ones where voters still get to have a say in their government.
at June 07, 2019