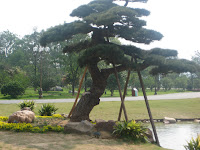 KORUS Is Safe for Now

The American political system faced a tough test in the first week of September when U.S. President Donald Trump proposed withdrawing from the Korea-U.S. Free Trade Agreement (KORUS). Thankfully, the system passed. Trump was forced to backpedal in the face of near-universal condemnation from trade and foreign policy experts, the Chamber of Commerce and other business lobbies, Republican and Democratic leaders in Congress, governors whose states would be hurt, and some senior administration members who quietly voiced their concerns. In the middle of all this, North Korean leader Kim Jong Un’s test of an enormous bomb made Trump’s plan look even more reckless.

Trump dropped the plan—at least for now. The good news, then, is that the American system is still able to constrain the president, even one who combines extreme willfulness with intense disdain for expertise. The bad news is that, as some experts fear, the KORUS withdrawal plan could come back into the spotlight at any time.

That fear is valid, given that Trump really did intend to withdraw from KORUS rather than just send a threatening signal, according to our sources in Washington. Axios reported it was “as close as it gets to a done deal.” Consider the sequence of events: On June 30, South Korean President Moon Jae-in visited Trump in Washington. The preset agenda focused on the threat from North Korea, the possible deployment of THAAD missile defense systems by South Korea, and trade issues. Renegotiating KORUS was not on the agenda.

Nonetheless, in an unusual step, Trump departed from the prepared agenda soon after the discussion began, telling Moon that the two countries would renegotiate KORUS immediately. Moon did not acquiesce, but that didn’t stop Trump from making a unilateral announcement at their joint press conference later in the day that KORUS renegotiation would soon begin. Moon kept a diplomatic silence then, but the next day, he told South Korean reporters that there was no such agreement. Two weeks later, on July 13, U.S. Trade Representative Robert Lighthizer sent a letter to Seoul asking for a special session of the KORUS Joint Committee to discuss “possible amendments and modifications.” At the August 22 meeting, according to Inside US Trade, the United States demanded that South Korea implement all of its planned reduction in farm tariffs immediately instead of on the dates set out in KORUS. At the same time, it insisted that the United States be allowed to postpone its own tariff reduction by five to ten years from the dates set in KORUS. Washington offered nothing in exchange. Seoul refused, as would any country.

In reaction, Trump decided to withdraw from KORUS. A week later, on August 28, just hours before North Korea shot a missile over Japanese air space, a Trump aide presented the withdrawal plan at a meeting of cabinet secretaries and other senior officials. An attendee told one of our sources that the matter was couched as an issue of personal loyalty to Trump. Dissent would have been extremely awkward for anyone who wanted to keep their job. Only one attendee dissented at the meeting, although others offered their objections to Trump in private. Among those were Trump’s chief of staff, his national security adviser, and his defense secretary. They were rightly concerned that a rupture in U.S.-Korean relations would encourage Kim in his belief that aggressive tactics could split the alliance between the United States and South Korea, as well as the United States and Japan. The secretary of agriculture also objected privately. American farmers, who are major beneficiaries of KORUS, were up in arms.

Nonetheless, Trump continued talking in public of withdrawal, despite the missile launch over Japan and even after North Korea’s test of a purported hydrogen bomb. It took three days and an extraordinary mobilization by American economic and security groups and individuals to set Trump back on his heels. The White House made no statements; the news came out via press leaks and private briefings of Congressional leaders. Thankfully, Trump cannot match his loud barks with much of a bite.

Why did Trump want to blow up KORUS? Administration insiders have told our sources two different stories. Some discounted it as just a hard bargaining tactic with Seoul. Others say that Trump was trying to send a tough message to Canada and Mexico that, if they did not succumb to U.S. terms in the NAFTA discussions, Trump might withdraw from NAFTA as well. But it is likely that a third explanation coexists with the second. Trump has not delivered much to his base. He couldn’t get Obamacare repealed. He couldn’t get Congress to fund his proposed border wall with Mexico. He is waffling on assorted immigration issues. A tough stance with South Korea would offer something to his base. In fact, Trump reportedly first spoke to his aides about withdrawing from NAFTA, which is loathed in the five traditionally “blue” states in the Midwest whose turn to Trump made him president. However, Peter Navarro, the extremely hawkish head of the National Trade Council, advised Trump that such a move would hurt U.S. firms and workers. As the alternative sacrificial lamb, said our source, Navarro put forward withdrawal from KORUS.

Although trashing KORUS might provide some emotional satisfaction to some of Trump’s blue-collar constituencies, it will do virtually nothing to help their living standards. Even if Trump could bring South Korea’s trade surplus with the United States back down to where it was before KORUS, that would give Americans just $35 each. The reality is that Trump has little control over the size of the deficit, with or without KORUS. White House illusions about this stem from believing its own misleading numbers. For example, Lighthizer wrote in his letter to Seoul that “Since KORUS went into effect [in 2012], our trade deficit in goods with Korea has doubled from $13.2 billion to $27.6 billion, while U.S. goods exports have actually gone down. This is quite different from what the previous Administration sold to the American people when it urged approval of this Agreement.”

Yes, South Korea’s goods imports from United States did fall three percent between 2011 and 2016, but that is not due to KORUS. It is mostly due to slower growth in Korea. In fact, during the same period, Korea’s imports from the rest of the world fell 24 percent—eight times as much. And yes, South Korea’s trade surplus with the United States has doubled since 2011, but, during the same period, its trade surplus with the rest of world tripled. Myron Brilliant, executive vice president of the U.S. Chamber of Commerce, wrote, “Without KORUS, U.S. exports of agricultural and manufactured products, as well as services, would likely have fallen substantially over the past five years.”

The Office of the U.S. Trade Representative has stressed that, in 2016, 90 percent of the United States’ entire trade deficit with South Korea came from passenger cars and auto parts. This, it says, proves how “closed” the country is to American automotive goods. Let’s take a closer look. American imports of South Korean cars and parts doubled during 2011-16. The cause lay not in KORUS but in the explosion of U.S. auto sales from just 13 million units in 2011 to a record 18 million in 2016 and the fact that, as quality soared above even that of Japanese brands in J.D Powers’ surveys of customers, the Korean automakers were able to sell pricier models.

Meanwhile, since KORUS came into effect, American automotive exports to South Korea have also doubled. In fact, Korea’s global car imports have risen from just 0.4 percent of car sales in 2000 to eight percent in 2011 just before KORUS went into effect, to 15 percent in 2016. The problem is that the U.S. share of South Korean car imports is still just eight percent, the same share as in 2011. This compares to 15 percent for Japan and 76 percent for Europe (the EU also has a free trade agreement with South Korea).

Trump does have an alternative that could appeal to his base without blowing up the U.S.-South Korean relationship. Between January and July of this year, America’s trade deficit with Korea fell 30 percent from the same months of 2016 and the deficit for the whole year may show an even bigger drop. Trump could take credit—as he has on other matters—even though he has nothing to do with it. In the famous expression from the Vietnam era, he should just declare victory and go home.

Thankfully, Trump cannot match his loud barks with much of a bite. He threatened to veto the budget—thereby causing the government to shut down—if Congress refused to fund his border wall with Mexico. Congress refused and Trump backed down. He will undoubtedly back down on his bluster about “stopping all trade with any country doing business with North Korea” as well. Stopping trade with China would wreak havoc on the U.S. economy. Nonetheless, the more Trump’s approval ratings erode, the greater will be his temptation to give his base something to send their pulses racing. Without constant vigilance, a return to his attempt to withdraw from KORUS is very possible. The U.S. political system has passed the test so far, but more trials lie over the horizon
at September 25, 2017