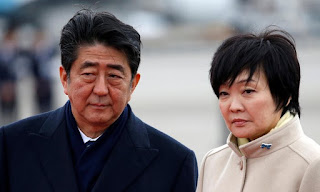 Abe caught out in school scandal

By Alexis Dudden, Professor of Japanese History at the University of Connecticut and APP member.

‘Growing scandal’ is the only way to describe the unfolding story about Moritomo Gakuen, a private education company in Osaka responsible for the controversial early education programs and schools currently under scrutiny in the Japanese parliament and press because of its close connection to Japanese Prime Minister Shinzo Abe.

Videos from Moritomo Gakuen schools of kindergarteners in sailor suits singing martial songs at a Shinto shrine under the approving gaze of its head priest and first graders finishing a running race by raising their hands in a Heil Hitler pose have shocked many observers. But more startling is the link of Japanese Prime Minister Shinzo Abe and his wife Akie to the school.

Mrs Abe had publicly expressed support for Moritomo Gakuen’s Mizuho-no-kuni Elementary School, stating that it is ‘wonderful’, ‘remarkable’ and ‘fosters children to have pride as Japanese and a strong inner self’. Until Prime Minister Abe announced on 24 February that she’d resigned, Mrs Abe was also the school’s honorary principal.

The Japanese Diet is now debating the involvement of senior ruling party members — including Abe — in the deeply discounted sale of the land to the school due to buried waste on the site, and also whether Mrs Abe acted in a public or private capacity in her support of the school. Prime Minister Abe has deflected the issue with bombast, declaring: ‘I find it very unpleasant to have [my wife] discussed as a common criminal…If wrongdoing is discovered, I will resign immediately’.

While Mizuho-no-kuni Elementary School is still under construction, Moritomo Gakuen’s related enterprises offer clues to the ‘wonderful’ and ‘remarkable’ ways that its teachers indoctrinate small children. Viral videos first surfaced some years ago of kids screaming, ‘Adults should protect the Senkaku Islands and Takeshima and the Northern Territories! Chinese and South Korean people who treat Japan as a bad [country] should amend their minds’. They feature Mrs Abe wiping away tears of appreciation during a school visit.

So what is it about the Moritomo Gakuen kindergarten that is so telling?

The images of children raising Heil Abe salutes jar a majority of Japanese and people around the world because they signify everything that was supposed to be different about Japan from 1945 to the present. Worse, these are children doing what adults tell them to do.

Whatever word best captures post-World War II Japan — constitutional pacifism or secularism — Japanese society committed to negating the cult of emperor worship that drove the nation to catastrophic war, the end of the empire and a devastated homeland. The current Emperor Akihito eschews displays of personal veneration that invoke a time when the Japanese viewed his ancestors as divine. But in 1997, the political group called Nippon Kaigi (Japan Conference) emerged with the central aim of changing all this through policy and education.

Nippon Kaigi’s grip on national matters today extends beyond its 40,000 members. Sixteen of twenty current cabinet ministers are prominent participants or directors of the group’s various divisions. Its ranks comprise former prime ministers and incumbent Prime Minister Abe, leading Diet members and key regional politicians, bureaucrats, writers, media moguls and educators — including the owner of the kindergarten at the centre of this scandal.

One member, Minister of Internal Affairs and Communications Sanae Takaichi, appeared in the US State Department’s 2016 Human Rights Report as a central figure in the strangling of press freedoms in Japan. Takaichi has been key to the Nippon Kaigi’s Parliamentarian League section concerning ‘History Issues, Education and Family Issues’ since 2007. Abe is in charge of ‘Defense, Diplomacy and Territory’ matters, while Yoshitada Konoike, the Upper House parliamentarian whom the Moritomo Gakuen kindergarten owner apparently tried to bribe, heads the subcommittee on ‘Constitution, Imperial Household and Yasukuni Issues’.

Nippon Kaigi’s primary goal is to restore the emperor as head of state and rear future citizens to worship him — no female rulers need apply — through late 19th and early 20th century Shinto practices at special schools.

Added to this mix, on 5 March, Japan’s ruling Liberal Democratic Party changed its rules to allow the head of its party a third term. If the scandal fails to break Prime Minister Abe’s stride he could run Japan until September 2021 and help to make Nippon Kaigi’s dreams come true.

Hopefully, open public debate will enable investigation of those involved in the scandal. Then, it should train its powerful — and democratic — lens on how the Moritomo Gakuen incident brings into relief the meaning of Japan moving forward.

For me, a ‘wonderful’ Japanese nursery school resides in one of Niigata’s less privileged areas — on a dilapidated shrine ground nonetheless — where my four-year-old found warmth and confidence, learned hiragana, and sang ’Totoro’ to his heart’s content regardless of what any of his teachers may have privately thought about who he was or why we were living in Japan. This, too, has every chance of being Japan’s future.
at March 26, 2017