Japan, Germany and the Burden of Trump 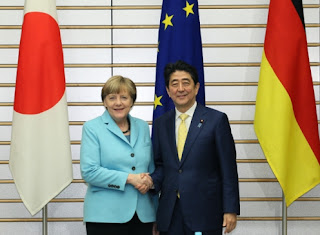 Next week marks the 75th anniversary of the attack on Pearl Harbor that triggered the U.S. entry into World War II. Now America’s two main antagonists in that war -- Germany and Japan -- will have to become more prominent defenders of the international order the U.S. built after its victory.

President-elect Donald Trump -- who adopted the prewar isolationist slogan "America First" -- has frequently signaled a discomfort with America’s many global responsibilities. He has suggested that its strategic alliances are worth only what U.S. allies are willing to pay for them, that trade agreements should be torn up and replaced with tariff wars, and that democracy and human rights matter less than good relations with autocrats such as Russia’s Vladimir Putin, Turkey’s Recep Tayyip Erdogan and Syria’s Bashar al-Assad.

It’s entirely possible, of course, that President Trump will view America’s role in the world differently than President-elect Trump. And it almost goes without saying that the U.S. remains, by an order of magnitude, the world’s most powerful nation -- economically, militarily, culturally.

That said, and given the premium that Trump has put on unpredictability, Germany and Japan will have to do what they can to fill any vacuum created by a retreating U.S.

Both countries share an interest in shoring up regional security. Trump’s tilt toward Putin and skepticism toward NATO will put an extra burden on Germany to hold the line on European Union sanctions against Russia and to step up German defense spending. Japan must work with a mercurial and unproven U.S. president in dealing with North Korea, even as South Korea is rocked by political scandal. To check Chinese adventurism, Japan must also increase its strategic cooperation with Southeast Asia.

Trump’s bluster on trade underlines the growing challenge to global economic integration, which was slowing even before his election and which is a prime concern to the world’s third- and fourth-biggest economies. In Europe, Germany will need a more flexible approach to the fiscal problems facing EU members and to negotiations over the U.K.’s exit from the union. Japan, faced with Trump’s scuttling of the Trans-Pacific Partnership, should take the lead in forging a high-standard trade agreement among the TPP’s other members, which would also promote greater regional stability.

Germany and Japan have long been quiet standard-bearers for democracy and human rights. Given Trump’s harsh positions on such issues as torture, Syrian refugees, and foreign aid, they’ll need to speak out more forcefully -- as German Chancellor Angela Merkel did in her tart post-election congratulations saying that cooperation with the U.S. depended on shared basic principles.

One U.S. presidential election, even one as momentous as this year’s, cannot unravel an international order more than seven decades in the making. But Donald Trump can and will disrupt that order. And when those disruptions prove dangerous, Germany and Japan may find themselves in the best position to protect the very values -- democracy, liberty, respect for the rule of law -- over which they once fought a war with America
at December 10, 2016