Japan's path to the terrors of the past 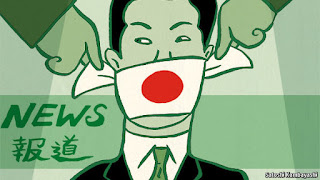 The pretext of counterterrorism covers many sins
By Jeff Kingston, director of Asian Studies, Temple University Japan and APP member

The Japanese government’s track record on respecting civil liberties and the rule of law is suspect, as I detailed in last week’s Counterpoint.

In 2002, the former Defense Agency, which is now a full-fledged ministry, spied on people who filed information disclosure requests, while the police and courts railroaded antiwar protesters on dubious charges of trespassing after they passed out flyers encouraging members of the Self-Defense Forces to oppose deployment in Iraq as war raged there in 2004.

These weren’t the only cases. A Buddhist priest was also apprehended while passing out antiwar flyers (imagine that, a peace-loving monk!), and the police kept a tail on one civil servant so they could catch him distributing copies of the Communist Party newspaper — arresting him even though it was on his day off. Don’t the cops have anything better to do than harass ordinary citizens exercising their constitutional rights? Is this how they pretend to keep the nation safe from terrorists?

In any society governed by the rule of law, it is essential to protect civil liberties by applying reasonable limits to police surveillance powers. In battling terrorism, such limits are portrayed by critics as handcuffing the police and other security agencies and thus endangering public safety. Unlike despotic societies defined by tyranny and the denial of human rights, however, democracies depend on ensuring that civil liberties are not trampled and human rights are respected. Debating the balance between an individual’s privacy and the state’s desire to pry strengthens a democracy and the rule of law — but this is a project that is never fully realized and depends on constant vigilance and an ongoing commitment.
As Japan wades ever further into the “war on terror,” it is important to ask what protections should be accorded to ethnic and religious minorities. It is evident that the police have zeroed in on Japan’s tiny Muslim community, seeing it as a potential hotbed of terrorism. But can this profiling of an entire community based on religious belief be justified? Is it not a violation of fundamental rights such as freedom of religion and privacy? Are such discriminatory practices consistent with democratic norms?

The it-can’t-be-helped school of thought asserts that terrorists don’t abide by any rules, so democratic societies are vulnerable and therefore sometimes need to curtail civil liberties and discriminate for the greater good.
Germany, however, has found that such blunt instruments are ineffective. According to a report by the U.N. Human Rights Commission, a German profiling program known as Rasterfahndung gathered information on 32,000 Muslim residents in Germany, but failed to identify any suspected terrorists.

There are an estimated 100,000 Muslims in Japan and it has been reported that the government has compiled dossiers on 70,000 of them. It has so far failed to identify a single terrorist, but has succeeded in indiscriminately invading privacy. The courts have sided with the police, affirming their right to conduct surveillance based on profiling alone without an iota of evidence suggesting criminal activities or terrorist inclinations.

Back in 2010 there was a leak of documents from the Tokyo Metropolitan Police Department that revealed just how intrusive this surveillance is, prompting a lawsuit that accused the police of violating constitutional rights to privacy and religion, and protections against discrimination. In 2014 the court awarded token damages for the leak of personal information, but dismissed the constitutional claims and held that the police surveillance was necessary and inevitable. This means it is open season for the police to collect personal information and conduct surveillance of designated groups of people based on ethnicity or religion, absent any concrete evidence justifying intrusions of their privacy and human rights.

So, with judicial backing, the police can take the picture of everyone who enters a mosque in Japan and intercept the communications of any resident solely based on the individual’s faith. As Japan boosts tourism in the run-up to the 2020 Olympics it is attracting many Muslim tourists, but are they all being tracked as potential terrorists? Can customers of halal restaurants expect special scrutiny? That’s a sinister twist on the welcoming spirit of omotenashi.

You only need to look at South Korea for an example of a nation struggling to prevent the wholesale expansion of police powers under the pretext of cracking down on terrorism. President Park Geun-hye’s ruling Saenuri Party is pushing through an antiterrorism bill that would give her country’s National Intelligence Service (NIS) sweeping new powers that are “justified” by the “security emergency” associated with North Korea’s recent nuclear test — despite a lack of concrete evidence that shows Pyongyang is preparing terrorist attacks on South Korea.

There are concerns that the law would primarily serve to repress internal dissent in line with Park’s efforts to tame the press and intimidate critics, including educators. Opposition parties tried to block the new law by mounting a record-breaking filibuster because there is no pressing need to expand the extensive snooping powers the NIS — an organization indelibly associated with terrible excesses under a succession of authoritarian governments — already enjoys.

Moreover, the NIS has been implicated in a dirty tricks campaign that helped Park win elections in 2012 by a slim margin, and oversight mechanisms remain feeble. One can understand why security agencies seek indiscriminate authority to collect intelligence, tap wires, conduct investigations, track financial transactions, delete online posts and impose travel bans — that is the nature of the beast. But giving them a blank check is perilous to civil liberties and constitutional rights. Rather than unleashing the NIS, it needs to be reformed and subject to more extensive monitoring to prevent abuses. As Japan ratchets up its counterterrorism capabilities, the NIS provides a worrying example.

Internal Affairs and Communications Minister Sanae Takaichi has gained notoriety for her comments warning that the government could suspend broadcasting rights if programs are deemed “politically biased. “Problematically, the ruling Liberal Democratic Party’s idea of bias seems to be defined as criticism of its policies — an essential element of democratic societies. So it’s not enough that media firms have ousted several newscasters critical of Prime Minister Shinzo Abe’s policies, or that they have hired relatives of Abe (a nephew at Fuji TV) and Deputy Prime Minister Taro Aso (a nephew at TBS), now they are being warned that in the coming battle over revising the Constitution, the government is taking off the gloves.

These developments are having a chilling effect on freedom of the press and expression in Japan, and raise real concerns about expanding police powers under the guise of counterterrorism. Attempts to muzzle the media while subverting the public’s right to know through the new state secrets law imperils democratic freedoms and highlights the need to strike a virtuous balance between ramped-up counterterrorism, civil liberties and accountability.
at March 26, 2016