November 25 - International Day for the Elimination of Violence Against Women 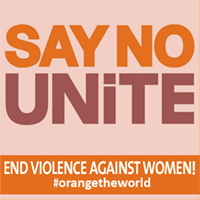 Today we celebrate the many stories of courageous and bold action to end gender-based violence— the nuns helping people escape sex trafficking, the men in Argentina teaching boys in football clubs to treat women with respect, the businesswomen in Detroit raising money to test rape kits, and the college students in India speaking out against gender-based violence and advocating for stronger enforcement of laws and public safety.

This cause is deeply personal to me. When I was a prosecutor outside Boston in the 1970s, I worked to put people behind bars for rape and sexual assault. We were one of the very first jurisdictions in America to set up a witness protection program so that people weren’t twice victimized – once by the crime and once by the system. And we put together a priority prosecution unit that took such cases and put them on a fast track for trial. Because no matter who you are or what you do: “No” means “no”; “against will” means “against will”; and force is never acceptable.

But the truth is that far too many cases of violence continue to occur—the wife beaten by her husband in Papua New Guinea, the college student sexually assaulted on campus in the United States, the women raped by government soldiers in the Democratic Republic of Congo, the 15-year-old girl in Europe at risk of female genital mutilation/cutting, the young Afghan stoned to death because she refused to be married, and the thousands of minority women and girls enslaved by Daesh and subjected to serious human rights abuses.

Gender-based violence is a problem in every country around the globe, including the United States. One in three women around the world will experience gender-based violence in her lifetime. For older women, women with disabilities, transgender women and women in marginalized communities, the reality is even worse. And all of this comes at a terrible cost, not only for women, but for families, communities, economies, and countries the world over.

Each and every one of us can do something to end gender-based violence. The United States is committed to tackling these issues by strengthening the rule of law, extending a hand to survivors, and working to change outdated attitudes about women and girls. We're also working with global partners to eradicate conflict-related sexual violence, and we welcome a new G7 report highlighting the power of collective action.

The bottom line is that we do this work every day, 365 days a year. But on International Day for the Elimination of Violence Against Women, and over the next few weeks during the 16 Days of Activism, we shine a spotlight not only on the deplorable instances of gender-based violence, but also the heroes working to end it. And we pledge to continue our efforts to support survivors, work toward prevention, and make crystal clear that gender is never a justification for violence.

Publication of the G7 Report on the Implementation of the G8 Declaration on Preventing Sexual Violence in Conflict, November 25, 2015

The Chair of the G7 has the honour to present the G7 Report on the Implementation of the G8 Declaration on Preventing Sexual Violence in Conflict.

The Declaration was made in April 2013 to address the prevalence of systematic and widespread sexual violence in situations of armed conflict. We set out to work together, in a concerted campaign, to strengthen prevention and response. Better support needed to be provided to victims, more capacity needed to be built for prevention. We sought to remove barriers that prevent effective monitoring and reporting of sexual violence and improve accountability and access to justice.

This report illustrates the progress that has been made by providing a selection of concrete actions by G7 members and highlighting other major international efforts with G7 participation. It represents an intermediate step and serves as a symbol of renewed commitment by the G7 to the Declaration.
G7 Report on the Implementation of the G8 Declaration on Preventing Sexual Violence in Conflict PDF | 394 KB (9 pages)

Japan as noted in the G-7 report
In the same year [2014], Japan held a public symposium in Tokyo with the International Committee of the Red Cross (ICRC) to discuss and deepen understanding of the main challenges and responses to sexual violence in armed conflict.
Japan made a voluntary contribution of approximately €600,000 to the Trust Fund for Victims at the International Criminal Court (ICC) to support survivors of sexual violence. An additional €400,000 is earmarked to support survivors of SGBV.

In 2015, Japan allocated an additional $2.55 million in 2015, to support the work of the Team of Experts in the DRC and the Central African Republic. Japan became the largest donor to the Office of SRSG on SVC in 2014, with a contribution of $2.15 million in order to bolster the judicial systems in the DRC and Somalia.
Japan's Ministry of Foreign Affairs Page on Women