Didn't Japan drive off this bridge once before? 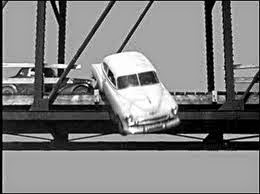 
The secretariat of the National Security Council is drafting a proposal to allow Japan to exercise the right to collective self-defense in cases of economic threats - even when there are no military threats - to Japanese citizens, the Mainichi Shimbun learned Feb. 3.

The proposal has drawn fire from the ruling Liberal Democratic Party's junior coalition partner, Komeito, for its potential to stretch the definition of "threat" and expand the scope of Self-Defense Force (SDF) operations.

The National Security Secretariat's draft proposal allows for Japan to exercise the right to collective self-defense if a situation is determined to be likely to cause economic damage to Japanese citizens, even if there is no expected military threat. It would expand the range of force indicated in a Cabinet decision passed in July 2014, and give the SDF the go-ahead to participate in minesweeping missions during wartime in the Strait of Hormuz in the Middle East. Komeito, however, is set to oppose broadening the scope of Japan's right to collective self-defense.

According to the July 2014 Cabinet decision, Japan's use of force is permitted only when "Japan's existence is threatened and there are clear dangers to its people's right to life, liberty, and the pursuit of happiness being fundamentally overturned." Existing laws, however, are based on the premise of individual self-defense, and permit the SDF to use force only when an attack has occurred, or if Japan is in an armed attack situation and in imminent danger. An armed attack situation in which an attack on Japan is predicted, meanwhile, does not grant Japan the right to use force under current legislation.

The National Security Secretariat aims for legislative amendments that would allow Japan to exercise the right to collective self-defense if, for example, due to military attacks on another country, Japan is unable to import oil and suffers economic losses, putting Japanese citizens' assets in danger. Some suggest using the term "survival risk situation" to refer to such cases with relatively low levels of danger.

The Cabinet Legislation Bureau, however, indicated during Diet deliberations that the condition for the use of force by the SDF as established by the Cabinet decision is the level of probability that war would reach Japan. The latest proposal could infinitely stretch the definition of "danger,"and that possibility has provoked strong objections from Komeito, which argues that a new interpretation could be characterized as violating the Constitution and is inconceivable.

With some in the LDP also wary of making such a step, the proposal is unlikely to pass.

Senior ruling party officials had heretofore negotiated revision of security legislation behind closed doors, but the prime minister's office urged them to conduct talks publicly in order to speed things up so that draft bills can be submitted after nationwide local elections this spring. One senior party official said that no agreement was reached in behind-closed-doors negotiations, while a government source admitted that the government was searching for common ground that the LDP and Komeito could share to get the security-related bills off the ground.

The administration is also hoping that by setting the bar high initially in ruling party deliberations over the right to collective self-defense - an issue that has much of the Japanese public worried - the ruling party can later claim to that same public that it had reined in its aspirations regarding the use of force.

Ruling party deliberations on security legislation will begin between the LDP and Komeito on Feb. 13.
at February 09, 2015