Shinzo Abe’s Cabinet Reshuffle or not 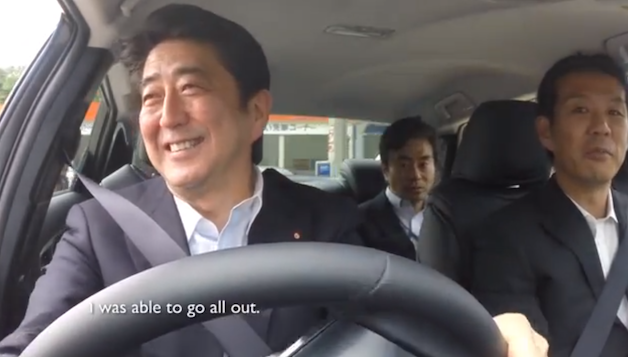 APP's Director Mindy Kotler and Deputy Director George Lazopoulos, Ph.D. had an essay on what to expect for the Abe Administration's September 3rd cabinet reshuffle in The Diplomat on September 02, 2014.

We conclude that the cabinet members may change, but the far-right ideology will remain the same. Ideology was the criteria for selection.

On September 3, Japanese Prime Minister Abe Shinzo plans to reshuffle his cabinet, arguably the most conservative of the postwar era. Starting with the prime minister, members define a “normal” Japan as one not simply maintaining an active military, but one that rejects individual liberties, the separation of religion and the state, and Imperial Japan’s wartime culpability. All are positions at odds with the agreements that ended the war with Imperial Japan and established the U.S.-Japan alliance.

Abe’s new cabinet is unlikely to differ. A distinguishing feature in our think tank’s recent analysis of the current Abe administration is its high degree of ideological conformity, specifically focused on ultra-conservative social policies and revisionist historical notions. This is a departure from the postwar tendency to form cabinets by balancing factions (habatsu) within the ruling Liberal Democratic Party (LDP). The factions are both personal and policy-focused power groups.

Factional politics forced prime ministers to craft their cabinets among competing interesting and personalities. This allowed for a range of policy perspectives. In contrast, the Abe administration is characterized by common memberships in conservative nationalist, private policy organizations, or parliamentary leagues (giin renmei), which are informal issues groups for legislators. The criteria for inclusion in the Abe cabinet are neither seniority nor balance, but ideological commitment.

An overwhelming majority of the members of the Abe administration belong to one or more of 18 parliamentary leagues and issue groups that we have identified as championing conservative, sometimes extreme nationalist views. These include support for full constitutional revision, opposition to a Japanese human rights bill, rejection of equality between the sexes, opposition to Japan’s Teachers’ Union, defending Japan’s honor as a liberator of Asia, and a belief that autism is the result of lax, bad parenting. Goals include the revival of patriotic education and the return of a divine Emperor to political power.

Uniting all these groups is a goal of overturning the postwar regime and what they view as its “masochistic” view of Japan’s war history. They disavow as “victor’s justice” the verdicts of the Tokyo War Crimes Tribunal that found Imperial Japan’s government and military culpable for crimes against humanity. And they dismiss the 1947 Constitution as an American invention designed to control Japan and encourage un-Japanese individualism.

The hub of these leagues, with a membership that claims 63 percent of the extended 97-member Abe administration and nearly 90 percent of its 19 cabinet ministers, is the Shinto Association of Spiritual Leadership Diet Members’ Caucus (Shinto seiji renmei kokkai giin kondankai). The caucus is an extension of the Shinto Association of Spiritual Leadership, an organization established in 1970 to preserve the political presence of Shinto in Japan.

Shinto, as defined by the association, resembles State Shinto, which was the official ideology of Imperial Japan (1868-1945). Members want to restore the divine right of the Emperor and support the reinstatement of the Emperor as the executive of Japan. Japan’s current constitution rejects this view and separates the political and religious realms. Abe is the Association’s current secretary-general.

The second largest membership group, claiming 53 percent of the extended administration and nearly 80 percent of its top ministers, is the Association of Diet Members for Worshipping at Yasukuni Shrine Together (Minna de Yasukuni jinja ni sanpai suru giin no kai). Yasukuni is a government-created Shintō shrine that apotheosizes Japanese killed in the service of defending the Emperor from 1869 to 1945. Yasukuni embodies State Shinto and its totalitarian hold on wartime Japan. The Shrine, its surrounding park, and museum all celebrate Japan’s self-proclaimed liberation of Asia and reject as victor’s justice the verdicts of the war crimes trials. Recent official visits to Yasukuni by cabinet members, including Abe, provoked indignant condemnation from countries formerly occupied by Japan.

These organizations bring together legislators and businessmen to promote a nationalist agenda that is premised on the belief that Japan has been a victim, first of Euro-American aggression, then of false history that was invented as part of the Tokyo Trials to rob Japan of national pride and martial spirit and to force subservience to America. These groups’ believe that there has been an international conspiracy by Chinese and Koreans to invent war crimes in order to undermine Japan’s position in East Asia. If Japanese young people only understood these facts, members argue, social order would be restored and the economy would grow. Historical revisionism and a patriotic education are viewed as fundamental to national survival.

For some of the cabinet members, there are intensely personal reasons to defend the wartime era. For example, the prime minister’s grandfather Nobusuke Kishi, an administrator of Japanese occupied Manchukuo and the longest serving member of the Tojo wartime cabinet, was an accused war criminal. He was also a founder of one of the parliamentary leagues advocating the promulgation of a Japanese, not American written constitution. Internal Affairs Minister Yoshitaka Shindo’s grandfather died as one of the commanding officers of Japanese forces on Iwo Jima. Deputy Prime Minister Taro Aso and Agriculture Minister Yoshimasa Hayashi both have profited from family-run companies (Aso Group and Ube Industries respectively) that unapologetically used Korean and Allied POW slave labor.

The leagues and caucuses comprise the “big tent” for Abe’s conservative movement. These groups are no longer fringe repositories of discontent. They provide the ideological language of tradition, religion, and cultural values that underwrite the entire Abe program. They are powerful, well-funded, mainstream, and now very influential.

The United States and the 48 nations (which do not include China, Korea or India) that signed the San Francisco Peace Treaty with Japan on September 8, 1951 should be offended and alarmed by the Abe cabinet’s worldview. The Treaty is premised upon a stated acceptance of the Tokyo War Crimes Tribunal verdicts. It was Japan’s first step toward confirming its modern investment in the rule of law, democracy, and an alliance with the United States.

The recent revelation that Abe while prime minister twice sent hortatory messages to an annual memorial ceremony honoring Class-A and other war criminals confirms that the prime minister is more ideological than pragmatic. In the message Abe sent as president of the ruling Liberal Democratic Party (he argues that this is private, but in a parliamentary system the head of the ruling party is the prime minister), he hailed those executed by the Allied powers as “the foundation of their nation.” And he said “(the war criminals) staked their souls to become the foundation of their nation.” The ceremony is held every April at a memorial statue that describes the war crimes tribunals conducted by the Allied powers as “retaliatory” and calls all Japanese war criminals executed as “Showa Era (1926-1989) martyrs.”

Abe’s September 3rd Cabinet reshuffle will replace many important ministers. There will not be, however, any significant ideological shifts or policy changes. The basic qualification for a cabinet position is veneration of the values and architects of Japan’s failed wartime state. This undermines the foundation of the U.S.-Japan Alliance. However, it is now the new “normal.”
at September 03, 2014