Japan and the art of un-apologising 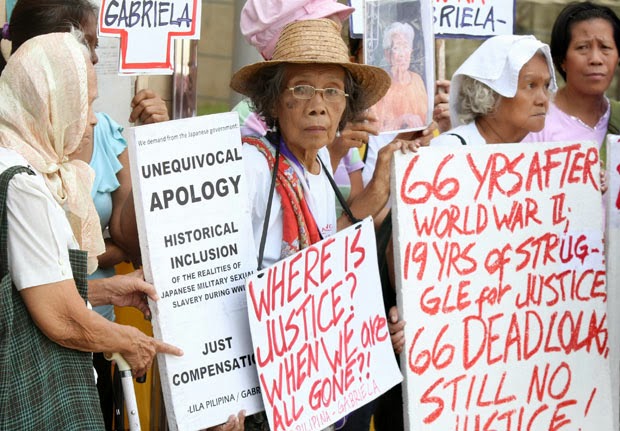 Japan and the art of un-apologising is an Op Ed published first in The Canberra Times, June 29, 2014 By Dr. Tessa Morris-Suzuki, APP member and an Australian National University College of Asia and the Pacific Japanese history professor and an Australian Research Council Laureate Fellow.

The Japanese government has long had difficulties coming up with effective apologies for the wartime misdeeds of the country’s military.

For decades, while many ordinary Japanese grassroots groups worked tirelessly to right the wrongs of the past, the silence from the corridors of power in Tokyo was deafening.

But then in the 1990s all that changed, and the Japanese government issued a series of statements on the events of the war. Like official apologies elsewhere, these were not perfect. Turning words into deeds proved to be a challenge. But the apologies enhanced Japan's standing in the eyes of the world; above all, they made a very big difference to many of the surviving victims.

Now the world is confronted with the spectacle of a Japanese government caught up in a contorted process of un-apologising; and a very strange and disturbing spectacle it is too.

The issue at stake is the Kono Declaration of 1993, an apology issued by Chief Cabinet Secretary Yohei Kono to the so-called "comfort women", women who suffered terrible sexual and other abuse in an empire-wide network of wartime military brothels.

Sexual violence in war is not a problem unique to Japan. Many countries have ugly stains on their history. But the "comfort station" system was remarkable in its size – tens of thousands of women were recruited. And there is abundant testimony from victims and others that many of the women were recruited by force or trickery.

The 1993 Kono Declaration was a forthright apology for these events. Though it focused particularly on Korean women, it was also addressed to former "comfort women" in other countries including Australia. It admitted that they were "recruited against their own will, through coaxing, coercion, and so on" and "lived in misery at comfort stations under a coercive atmosphere". It went on to promise that Japan would "forever engrave such issues in our memories through the study and teaching of history".

The Japanese government refused to provide direct monetary compensation to former "comfort women". But, following the Kono Declaration, it did offer welfare and medical support, while "atonement money" was paid from a non-governmental fund. This response, sadly, created divisions among the survivors: some welcomed the payments; others rejected them on the grounds that the Japanese state should pay direct compensation itself.

During the late 1990s, some Japanese history texts were extended to include a very brief mention of the "comfort women" issue, but this aroused the ire of Japanese nationalists, who launched a fierce campaign for more "patriotic" history education. All mention of the issue has now disappeared from textbooks, and the promise to engrave the issue in public memory has simply not been kept.

Meanwhile, the "comfort women" issue had become a political football in both Japan and Korea, being used by nationalists on both sides to enhance their popularity. In Japan some prominent conservative politicians launched fierce attacks on the Kono Declaration, which they regarded as an insult to the memory of Japan's war dead.

Japan's Prime Minister Shinzo Abe has always been uncomfortable with the declaration's references to coercion. But Abe is also an eager supporter of Japan's alliance with the US; and the US government, concerned to maintain good relations between Japan and South Korea, insists that Japan stand by the declaration.

This left the government with a dilemma: how to undo the words of the Kono Declaration without officially withdrawing the declaration. Here is the solution.

Step one: create a committee to "re-examine" the process by which the apology was put together. This, not surprisingly, finds evidence that the Japanese and Korean governments negotiated about the wording of the apology before it was released. Now the apology can be presented, not as a truly Japanese document, but as a compromise worked out by a Japanese government that lacked the will to stand up to pressure from the Koreans.

Step two: cast doubt on the veracity of victims. The Japanese committee's "re-examination" of the Kono Declaration does this by stressing the fact that some of the former comfort women whose testimony was collected had "quite confused memories", and that the Japanese government did not fact-check their stories.

Step three: define the word "force" extremely narrowly, so that it applies only to situations where women were marched out of their homes at gunpoint by members of the Japanese military. This allows your committee to inform the world that, according to the studies conducted by Japan, it is, after all, "not possible to confirm that women were 'forcefully recruited'".

The result is the un-apology that you make when you are not un-apologising. Now the Japanese government can truthfully insist that it has not withdrawn the Kono Declaration; all it has done is very effectively to demolish its credibility.

Prime Minister Abe has repeatedly stated that the "comfort women" issue should be left to the scholarly judgment of historians, but the government's committee contained just one historian, Ikuhiko Hata, who had been campaigning for years to have the Kono Declaration rewritten.

Hata, who has also made an art form of combing through the testimony of former "comfort women" for any inconsistency that may cast doubt on their truthfulness, publicly predicts that the committee's report is likely to make some Japanese people "so enraged that their hair will stand on end" and "conclude that Japan was duped by Korea". "Maybe," he adds, "a new public view will emerge that the Kono Declaration should be withdrawn."

The next step, foreshadowed by the prime minister's key political confidant Koichi Hagiuda, may be official tours to countries including Australia to present them with the "facts" revealed by the new committee report.

How Prime Minister Abe handles this issue on his impending visit to Australia will be watched with great interest – and at least some discomfort.
at July 09, 2014