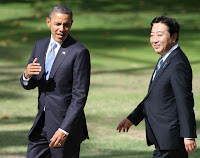 When a head of state of a major country visits the United States, there is a focus in the State Department, the Pentagon and the National Security Council on “deliverables” – items of agreement where one or both sides have made some sacrifices and which can be offered as bullet points in a press release.

An upcoming visit by Prime Minister Noda Yoshihiko to Washington (April 30-May 1) to meet with President Barak Obama may be seen as a disappointment or even pointless to American foreign policy observers.  There are virtually no big ticket deliverables in Prime Minister Noda’s travel bag.

On all the major issues that interest the United States – progress in the construction of a Futenma Replacement Facility (FRF) at Henoko on Okinawa, a clear mandate from the Diet for the Prime Minister to negotiate Japan’s participation in the Trans-Pacific Partnership preliminary talks with no exclusions, Japan’s immediate signature on the Hague Convention on child abduction; greater commitments of Japanese military power to the security of the Asia-Pacific region and the Gulf as the U.S. makes “the pivot” in its focus from West Asia to East Asia – Noda has no capacity to make any promises.

The best hope for a civil and significant conversation in between the prime minister and the president would be over the Japan-U.S. relationship in a broad context.

On Futenma, for example, the PM can report that he has sent minister after minister and even gone himself to Okinawa to seek the understanding of the people of Okinawa.  He will, if he dares, point out that a lot of Japanese citizens have been paying close attention to words of Senator Jim Webb and to the U.S. Congress spiking the apportionment for the U.S. contribution to the Futenma-Henoko-Guam plan. While Noda is self-effacing and non-confrontational in his speech patterns, he might ask what U.S. plans are regarding the Marine Corps, which would put President Obama on his back foot.

The question of Japanese importation of Iranian oil is tied into the question of restarting Japan's nuclear power plants. There will be huge delays in the restarting of Japan’s nuclear plants, too many of which are close to the 40-year lifespan of such facilities.  The lack of nuclear power has compelled Japan to keep its oil-fired plants full blast, forcing Japan to rely on large amounts of imported bunker oil.  Energy security has become a major issue among Japanese strategic thinkers, since with the exception of Australia and Indonesia, Japan will have to be keep buying fossil fuels from the Gulf, where the close of the Strait of Hormuz would lead to chaos in every East Asian nation, not just Japan.  As for buying oil on the spot market, it can only be realized with folks the U.S. would find unsavory.

As regards global financial stresses, particularly the situation in Europe, the PM will promise that Japan will be a full partner in aiding Europe to right itself financially. However, the government of Japan has, along with China, a quiet reticence about doing much of anything for Europe.  For China it is a question of balancing the needs of some of China's best customers versus the use of China's money to help the Chinese people directly. In Japan, the question is electoral, as the voters here will ask why Japanese taxes have to rise in order to bail out Greek pensioners.

Noda will probably want to talk all day about his government’s efforts to put its fiscal house in order. He will try to assure the president that raising the consumption during a period of deflation is a good idea, when the president's own economists will tell him what an absolutely terrible idea it is.  Noda will try to paint the consumption tax rise as Japan's contribution to greater global financial stability, as if constricting Japanese consumption will help the world economy grow.  He will also use the current fiscal numbers to try to explain the otherwise unexplainable: that after the Self Defense Forces saw their greatest deployment since '45 and performed a magnificent job in rescue and recovery from 3/11 and when it must counter rising, multi-faceted regional threats -- the Noda government has gone ahead and cut the SDF's budget again.

Noda will likely also touch upon the high yen, for the sake of Japan's manufacturers.  Not that there is anything much the president can or would want to do. Having Ben Bernanke raise U.S. interest rates, the only action the U.S. could take that would relieve the pressure lifting the yen, is nowhere on the president’s horizon.  Noda would love to say that Japan's growth is being stifled by the yen's strength and the problems with electricity supply, leading to the withering of Japan's manufacturing base, with production flying overseas, skipping over the structural issues the United States would like to bring up.  He will also probably bring up the matter of Japan’s moving into a structural trade deficit, a huge reversal of Japan’s longstanding position in international trade in goods.

Noda will also want to talk about the political situation in the Diet, and how he is making the most of the split in the parties control of the House of Representatives and the House of Councillors. He may try to draw parallels between his situation and the situation the president faces with Congress, in order to put the difficulties he faces in some perspective.

On foreign policy, Noda will try to steer the conversation away from Japan’s contribution to classical security and toward Japan’s more obvious contributions to the more diffuse realm of human security.  He likely will asking for the U.S. to work with Japan in building a better international infrastructure for dealing with natural disasters. He will also seek a common understanding of the immediate threat posed by the DPRK during its period of political transition, on the significance of the coming political transition in China (including whatever the U.S. knows about the Bo Xilai demotion) and Japan's many territorial disputes with its neighbors.  He would like to share a smile with the president over recent events in Myanmar/Burma and the SDF’s deployment of a peace-keeping force to South Sudan.  Noda would also likely like to sound out the president’s view of the future of India-U.S. cooperation and mention the immense investments Japanese corporations will be making in that country’s infrastructure and manufacturing base over the next decade.

As for the post-summit takeaway for the press corps, Noda will offer the image of Japan as a reliable U.S. ally in meeting the challenges of 1) a rising China’s political and military might, 2) in combating human security challenges and terrorism and 3) global instability.  He will likely have to admit that much of his time will be taken up putting Japan’s domestic house in order.  However, he will argue that a Japan with a more stable fiscal and political situation will be of the greatest benefit to the rest of the world.

By Michael Cucek
Research Associate
MIT Center for International Studies
This essay first appeared in the April 1, 2012 issue of the Asia Policy Calendar sent to APP members.
at April 12, 2012