Misunderstandings on the US Military Bases in Okinawa 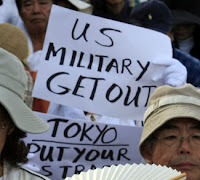 Longtime APP member, Ms. Yukie Yoshikawa, a fellow at the Regional Security Policy Division of the Okinawa Prefectural Government, published a CSIS Pacific Forum PacNet essay on April 5. She observes that although the relocation of Marine Corps Air Station (MCAS) Futenma in Okinawa has been the source of a long dispute between the United States and Japan, there is scant hope for resolution in the foreseeable future.

Ms. Yoshikawa finds this situation peculiar, since all parties – the US, Japan, and Okinawa – agree that the Futenma base is dangerous (with homes and schools close by), share the goals of removing the risk of accidents and reducing the US footprint on the local community, and have strong respect for the US-Japan alliance. Yet, nearly two decades passed with little change. She writes:

Roughly, 20 percent of Okinawans are pro-base (many of whom benefit from contracts with the Japanese defense ministry), and another 20 percent is anti-base, demanding a return of all bases in Okinawa. The silent majority of 60 percent is moderate, with mixed sentiments that include admiration for American culture and economic benefits, especially in the past, and anger and sorrow toward crimes by US soldiers, especially marines, and all the inconvenience the bases create, including noise. Given Prime Minister Hatoyama’s flip-flops, which alienated the silent majority, it is expected to take some more time for them to express understanding of the Henoko plan.

For Okinawans, a tangible reduction of the US military presence at the earliest possible time, while giving deference to Okinawa’s political climate, is the highest priority. Okinawans appreciate the intellectual exploration of alternatives to the Henoko plan, including those of US Sen. Jim Webb, Mike Mochizuki at George Washington University and Michael O’Hanlon at the Brookings Institution, and encourage others to follow suit.

Ideas worth pursuing further, include: merging MCAS Futenma marines into Kadena Air Base, while shrinking the US footprint to a smaller level than that currently at Kadena; a considerable reduction of marines in Okinawa to fill vacancies back home in alignment with marine corps downsizing; and a two-step measure to first, temporarily move marines to a few bases including MCAS Iwakuni, Kadena, and/or Self-Defense Force bases to clear MCAS Futenma while allowing Tokyo more time to find a suitable Futenma Replacement Facility (FRF) site, and then to relocate them to that site.

In April 2012, the Okinawan Prefectural Government created a new division, the Regional Security Policy Division, to develop an Okinawa version of alternatives, and to discuss them with distinguished external experts and with the two capitals. This is a bold step for a Japanese local government. The OPG thought out of the box and decided it had to do so as a responsible host to US Forces in Japan, a sincere contributor to regional security, and as a proud representative of Okinawans who have suffered enough and continue to do so.