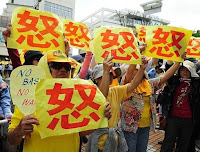 APP's Senior Fellow William Brooks has published in December Cracks in the Alliance? Futenma Log: Base Relocation Negotiations 2009-2010 on the current status of Futenma negotiations. It is issued by Johns Hopkins University SAIS Reischauer Center as a sequel to his highly regarded monograph The Politics of the Futenma Base Issue in Okinawa, which reviews the first two agreements to close and relocate the Futenma Marine Corps Air Station.

Dr. Brooks details how the first two Democratic Party of Japan (DPJ) governments—those of Hatoyama Yukio and Kan Naoto—committed to implementing previous bilateral US-Japan understandings, but in the end were unable to make significant progress. He makes three major points: (1) Hatoyama made serious tactical mistakes, that seriously complicate future resolution of the Futenma problem; (2) Forceful Japanese leadership is required for resolution of the Futenma problem, which Kan did not provide, despite a more positive attitude than Hatoyama; and (3) Feasible routes for resolution of the Futenma problem, consistent with original US-Japan understandings, still remain, but will likely involve a package agreement redefining some key elements of the 2006 understandings, that could take some time to negotiate.


The contradiction of asking for an immediate closing of a base, whose function in a contingency is regarded as critical, and at the same time saying that it cannot be relocated in Okinawa, while knowing full well from recent efforts that such an option is impossible, can mean two things. One is that the level of emotions among Okinawans since the Hatoyama “betrayal” is so high it has overridden logic and pragmatism. But it also means that Futenma has become a political cause – a tool for political activists who want to see all Marines or all U.S. bases out of Okinawa. Either way, Okinawa loses. The status quo – or worse – is likely to remain for a long, long while.

Like it or not, the strategic reality is that Okinawa has become even more crucial a center for the forward deployment of U.S. forces in East Asia as China becomes more militarily active in the region. Stable basing is a requirement for the U.S. forces in Japan, and Okinawa provides far more than its share of prime land for that purpose. The 2006 Roadmap Agreement promised to lighten Okinawa’s security burden by closing six facilities and shifting some of the U.S Marine presence to Guam, but it has not been implemented due to local resistance. There are no incentives thus for the U.S. to offer more concessions when the earlier ones have been spurned.