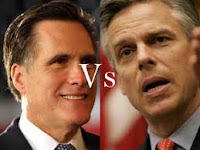 This week, both Mitt Romney and Jon Huntsman released their views on foreign policy and gave speeches focused on America’s world obligations. Both seem to acknowledge that maritime security in the Pacific will be a focus of their Administrations. Both believe that Americans must lead. Most interesting, there is nearly no mention of Japan or Korea in their statements. Huntsman even suggests that India, not Japan, should become a permanent member of the the UN Security Council.

Below are links to their statements and papers as well as quotes. Neither Herman Cain nor Rick Perry have yet outlined their foreign policy views. Mr. Cain, however, says he is prepared for those "gotcha" questions by reporters covering his campaign for president. He told a reporter that he plans to simply answer "I don't know" if he is asked, Cain said. "And when they ask me who is the president of Ubeki-beki-beki-beki-stan-stan, I'm going to say you know, I don't know. Do you know?"

US as #1
God did not create this country to be a nation of followers. America is not destined to be one of several equally balanced global powers. America must lead the world, or someone else will. Without American leadership, without clarity of American purpose and resolve, the world becomes a far more dangerous place, and liberty and prosperity would surely be among the first casualties.

China
China has made it clear that it intends to be a military and economic superpower. Will her rulers lead their people to a new era of freedom and prosperity or will they go down a darker path, intimidating their neighbors, brushing aside an inferior American Navy in the Pacific, and building a global alliance of authoritarian states?

No mention of Japan or Korean Alliances
And I will bolster and repair our alliances. Our friends should never fear that we will not stand by them in an hour of need. I will reaffirm as a vital national interest Israel’s existence as a Jewish state. I will count as dear our Special Relationship with the United Kingdom. And I will begin talks with Mexico, to strengthen our cooperation on our shared problems of drugs and security.

Military buildup
Among these actions will be to restore America’s national defense. I will reverse the hollowing of our Navy and announce an initiative to increase the shipbuilding rate from 9 per year to 15. I will begin reversing Obama-era cuts to national missile defense and prioritize the full deployment of a multilayered national ballistic missile defense system. I will order the formulation of a national cybersecurity strategy, to deter and defend against the growing threats of militarized cyber-attacks, cyber-terrorism, and cyber-espionage.

The world needs American leadership now more than ever. Yet we are struggling to provide it.

President Obama’s policies have weakened America, and thus diminished America’s presence on the global stage.We must correct our course.

I have come to believe that we are embarking on a Pacific Century…in which America must and will play a dominant role....Embracing this reality may bring a dramatic change to the look of our military. The Asia Pacific is a maritime theater whereas Europe was mostly a land theater.

And recognizing India’s emerging role, I will also support our ally’s bid to become a permanent member of the U.N. Security Council, as is fitting a country representing one-sixth of humanity.

It’s all about the economy
To be good abroad, we must be great at home. America's competitive advantages are impermanent and can be squandered if we are not wise in the management of our resources and in choosing when and where to exercise our power. Through dramatic overhaul of our tax system and aggressive regulatory reform, we can once again unleash our creative class and give the American entrepreneur the chance to succeed.

Alliances but no mention of Japan or Korea
The international environment is rapidly changing, and the foundation for United States foreign policy should remain rooted in our traditional alliances. But we must also craft wise policies with respect to the new great powers. India can be a more valued strategic partner to the United States, and a better and more effective approach to the China relationship is also needed.

Asia
No distinct sidebar link to Asia but one to “Central Asia” (bet he knows the president of Uzbekistan) and a mention of Asian countries, but not China in “Trade.”

The United States should immediately initiate bilateral negotiations with Japan, India, Taiwan and Brazil, with the goal of concluding new free trade agreements with each.
at October 13, 2011