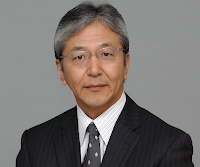 The DPJ looks set to get their man in DC. Japan’s next ambassador to the US is rumored to be Mitoji Yabunaka, the former Ministry of Foreign Affairs Vice Minister. But despite his tenure at MOFA since 1969 - the same as current Ambassador Ichiro Fujisaki - Yabunaka has been receptive to Democratic Party of Japan views.

Yabunaka's best-selling book The Destiny of the Nation laments Japan's current diplomatic situation, and he has not hidden his desire to become ambassador to the United States. His only previous US experience was as Consul General in Chicago (1998 and 2002).

He studied at Osaka University, and graduated from Cornell University. He spent a year as the senior researcher at International Institute for Strategic Studies in London. He is currently a consultant to Noruma Research Institute.

about US-Japan relations, Japan Needs a Shock to Awake. Yabunaka argues that the alliance with the United States is as relevant as ever, given the rise of China, but Japan must face the shock of embracing immigration to stave off the calamity of a greying Japan.

Perhaps more can be learned from his book Destiny of a Nation published upon his retirement from Japan’s Foreign Ministry in the summer of 2010 after 40 years of service.

He urges Japan to consider distancing itself from the overwhelming diplomatic sway of the US and to adopt an independent role in world affairs, which resonates with with the principles of diplomacy laid down by the DPJ.

Yabunaka is particularly critical of Japan’s passivity in meeting diplomatic challenges, and “blindly following the US” instead of taking its own stand. He reveals a latent hostility toward Japan’s having dispatched SDF troops to Iraq for non-military support during the war, stating his preference for economic assistance.

He does not say that Prime Minister Koizumi’s decision to dispatch the SDF to Iraq was wrong, but he stresses that a decision to go against the US pressure for “boots on the ground” and not send the troops would have been a major policy step.

Yabunaka is not against peace-keeping activities that are civilian based, again echoing DPJ principles. In that context, he would like Japan to break away from the ingrained tendency of never doing anything diplomatically outside the context of the alliance relationship with the US. In other words, Japan should consider its national interest in its contributions to the international community.

Telling was his 2008 response to flak from the US that Japan had done too little to support the war in Afghanistan. Yabunaka answered by defending Japan’s record of economic assistance to Afghanistan, citing the building of 500 schools, training 10,000 teachers, and providing education to 300,000 students. He noted that Japan had built 50 hospitals, providing vaccines to millions of Afghans, built 650 kilometers of roads in difficult areas, and recently, completing a terminal at Kabul Airport. Moreover, Japan has paid half the salaries of 80,000 policemen in that country. He said that the Americans, unaware of these contributions, were unable to respond.

Having experienced as a MOFA negotiator the contentious years of economic disputes with the US during the 1980s and 90s, Yabunaka understandingly harbors bitter memories about some of the trade and economic concessions Japan had to make to the US. He points the finger at Japanese politicians for their tendency to overrule hard-nosed trade officials and make a “political decision” that gave the US more or less what it wanted, and at the Japanese media for simplistic claims of “Japan bashing” and now “Japan passing”.

But his biggest bête noir seems to be the bureaucracy itself, from which he has emerged, for aiding and abetting a pattern of ultimately giving in to foreign pressure during negotiations, while making few efforts to meet it halfway. He laments the tendency of the Japanese side to plead for “understanding” of Japan’s position and to ask that “special consideration” be given, while the bureaucracy stifles innovation.

He is concerned that Japan may find itself isolated unless it changes some of its domestic systems, starting with the economy itself. For example, the incompatibility of Japan’s domestic standards from the rest of world must be eliminated. The domestic economy can grow only if it can continue to develop and supply Japan’s best products to the world.

That's the script anyway. Now, it's up to Yabunaka to act.

>If you want to learn more about Mr. Yabunaka, you can meet him on March 14 in London when he gives a talk to the Japan Society of the United Kingdom.

NB A fuller version of this article was included in the Asia Policy Calendar newsletters sent to APP members. Individuals can subscribe HERE. Institutions, please contact us for details.
at February 10, 2011