Kan caught between a rock and a hard place 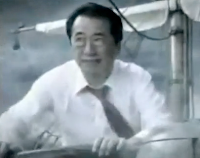 Kan's ship of state is not an all-together happy one. Not only has the Kan administration’s handling of the Senkakus incident been universally condemned as weak-kneed, it also has set off alarms about Japan’s national security among the DPJ hawks.

A group of DPJ defense policy specialists led by Akihisa Nagashima last week handed a petition to Prime Minister Kan that criticized the “political” decision by Naha prosecutors to release the captain and let him return to China. The incident, they noted, gave an impression of Japan’s weakness to ASEAN countries, which are concerned about Chinese assertiveness in the South China Sea. The group called on the government to take steps to shore up security strategy in tandem with the US as ally.

Even Japanese Communist Party Chairman Shii appeared on television last week to excitedly condemn China for daring to claim the Senkakus. He cited documents to prove that the Japanese were there first, and insisted that Beijing only became interested in the isles during the 1970s, when it was learned that the sea area nearby harbored potentially great reserves of valuable natural resources.

If Kan got bad press, at least the US, with its early confirmation that the Senkakus came under the security treaty, came out smelling of roses. Most happy was the conservative Sankei newspaper, which reported from Washington on October 4 that the US and Japan were now planning military exercises to “take back the Senkakus,” although such a scenario has yet to be verified by the Pentagon.

And China is the bogeyman once more. A Sankei opinion poll released October 4 found 71.5% of the public viewing China as a threat to Japan’s national security, and 80% felt that the incident had worsened their image of that country. Moreover, 83.1% said they did not trust China.

In a Yomiuri poll, also released on October 4, 90% of the public said they wanted Japan to state more clearly to the international community that the Senkakus are part of Japanese territory. The same day, Mainichi reported that Prime Minister Kan did do just that at the Asia-Europe Meeting in Brussels last week. He also had a brief meeting with China's Premier Wen Jiabao.

The move may help Kan recover lost ground in the polls. The public has been unforgiving about his handling of the Senkakus incident, with the October 4 Sankei poll finding 81.5% of the public calling his administration “weak-kneed” for allowing the release of the captain. Public support for the Kan cabinet plummeted from an all-time high of 64.2% in September to 48.5% in the Sankei poll. Other polls had similar results.

Kan did defuse a potentially dangerous situation while allowing China to look unreasonable and aggressive. Better, Kan extracted from the US statements that the Senkakus are part of part of the US-Japan Mutual Security Agreement and that the US will protect its Asian allies from Chinese bullying. He even accomplished a bi-lateral meeting with his Chinese counter-part to confirm the importance of Japan-China bi-lateral ties and good relations.

Maybe, in time, the Japanese public will realize what the Chinese government learned. China lost a lot of goodwill by ramping up a minor maritime clash. And Kan did pretty well for someone who pundits say shows little interest or acumen for foreign policy.

Dr Brooks is quoted in the October 10th Japan Times discussing Kan's handling of the Senkaku issue and Japan's press reaction.
at October 11, 2010