Voters driven to distraction as Hatoyama destination is becoming known 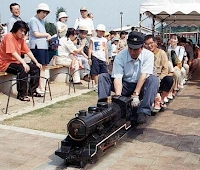 There does not appear to be any way for Prime Minister Yukio Hatoyama to head off the political train wreck coming his way.

With his popularity having reached even more dangerous lows – 20 to 24 percent range -- in the latest polls, an inquest panel’s finding this week that DPJ Secretary General Ichiro Ozawa should be indicted for his money scandals, and news of his seemingly desperate decision on Futenma relocation that is only likely to bring the wrath of Okinawa down on his head, the Prime Minister seems to be coming off the rails. He has no allies in the press, with even liberal dailies friendly to the DPJ decrying his mishandling of the issues. The Western press continues also to hammer him for allegedly creating a crisis in the US-Japan alliance over the Futenma issue.

The consensus in the press, and among a growing number in his party, seems to be that Hatoyama simply cannot lead his party into the summer Upper House election with a support rate now around 20% and falling. The result would be a disaster. It would not be surprising to have him first seal up a highly unpopular deal on Futenma and then, taking responsibility for breaking a campaign pledge to move the facility out of Okinawa Prefecture, resign his seat as prime minister to make way for a more popular leader. Rumors have Finance Minister Naoto Kan, a popular figure in Japanese politics, to take the driver's seat prior to the election campaign period.

After months of hemming and hawing on where to relocate Futenma, a Marine Corps base located in downtown Ginowan City on Okinawa, and floating just about every conceivable site proposal ranging from Kyushu to Guam, the Hatoyama government, reportedly has decided, apparently in desperation, to return to square one and opt for the original relocation plan from 2006 with some modifications.

Since Hatoyama promised in last year’s election campaign to move Futenma out of the prefecture, his reneging will inevitably outrage Okinawa, where only last week approximately 90,000 demonstrators* angrily protested against any agreement that resulted in Futenma being relocated inside the prefecture. The DPJ’s coalition partner, the Social Democratic Party, already has flatly come out against the plan. It is no wonder that the controversial decision was leaked to the press at the start of the Golden Week consecutive holidays, when people are on vacation and less attentive to the news.

According to the business daily Nikkei on April 29, the US government has been informed that: 1) the current plan to reclaim land along the shore line of Camp Schwab will be revised and altered to a more environmentally-friendly construction method that would involve installing a pier supported by posts; and 2) a portion of the training by the helicopter unit will be carried out on a scale of up to 1,000 troops on Tokunoshima, an island in Kagoshima Prefecture. Prime Minister Hatoyama plans to visit Okinawa May 4 to explain the new plan to Governor Nakaima. Working-level talks on the new plan will start possibly in early May.

The revised relocation plan, the third iteration since the 1995 SACO agreement, is a combination of a 1996 proposal to build a sea-based runway off Henoko and a 2006 revision to build the runway along the shoreline of Camp Schwab, with parts of it jutting into the sea. The revised plan if implemented would finally allow for the closure of Futenma, eliminating the potential danger there of another helicopter crash like the one in 2004 into an adjacent university campus, where miraculously no civilians were hurt.

The proposal to remove training to Tokunoshima, which has an existing runway, is an obvious attempt to convince Okinawa to somehow swallow the decision not to remove the helicopter unit from the prefecture. Even if the U.S. concurs with the new plan, there is no guarantee that the residents of Tokunoshima, half of whom turned out recently to protest any relocation of Marines to their island, will change their tune. And Okinawans, too, seem unlikely to forgive Hatoyama for a decision that the residents will paint as a betrayal of trust. Implementing the third iteration of the Futenma relocation plan may prove to be just as elusive as its predecessors.

Ozawa once more on hot seat

Hatoyama also faces the nation’s severe judgment for keeping in place a party leader who most Japanese want to see out of power, as the polls have repeatedly shown. The latest blow for the Prime Minister was the news on April 28 that an inquest panel had ruled DPJ Secretary General should be indicted for alleged violation of the Political Funds Control Law, even though the Tokyo District Prosecutors Office earlier this year decided not to prosecute, citing insufficient evidence. Prosecutors are now obliged to reinvestigate the case, which makes it all the more likely Ozawa will eventually be indicted. Though editorials and the public in the latest polls are clamoring for Ozawa to quit his post, the DPJ powerbroker continues to stonewall.

The Japanese public, which will soon go to the polls in the Upper House election this summer, have not only given up on the Hatoyama Cabinet, they also have turned aside from the DPJ as the party of choice. The latest round of opinion polls released this week all show Hatoyama’s popularity at an abysmally low 20-24 percent range, reminiscent of the status of the last three LDP prime minister’s before they left office.

The surveys also show rapid decline in the DPJ’s support rate, with voters either joining the unaffiliated ranks or opting to support small splinter parties. The former ruling LDP, now in shambles with defectors leaving to form mini-parties or become independents, has little appeal for disaffected voters. Even if the DPJ switches to a more popular leader and rids itself of the albatross that Ozawa has become, it seems unlikely that it will score a victory in the election, though it is too early to predict how bad the result will be. Japanese politics seems to settling into yet another long, hot summer of voter discontent.