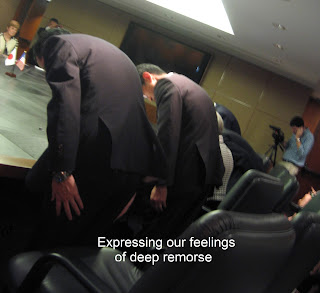 Former POW of Japan James Murphy who was a slave laborer in Mitsubishi Material's (MMC) Osarizawa Copper Mine in Sendai is sitting before this group of bowing MMC officials who had just delivered to him the company's apology for the inhumane treatment he received during World War II.

Among the officials bowing was MMC board member and fluent English-speaker Yukio Okamoto, a well-known Japanese foreign policy consultant. He has been involved behind the scenes in a number of important Japanese apology initiatives. These include the Kono Statement, the Asian Women's Fund, the 1995 Okinawa Rape incident, and Koizumi's 2005 War Anniversary statement. He is on the current prime minister's committee to help draft a statement to commemorate the 70th anniversary of the end of World War II.

The apology was delivered in Japanese. Although the formal apology word shazai was not used and the POWs were described as being "forced to work" as opposed to "forced" or "slave" labor, the apology was accepted and appreciated. As Mr. Murphy said, "it was a glorious day."

Mitsubishi Material's ambiguous apology, constrained by an impenitent political climate, will be strengthened over time by the truth. The apology is a beginning and an opening. It will allow the POW history to be told and believed. The telling of this history will make it clear that it was Mitsubishi that purchased the men, that forced them to work in horrific conditions, and that allowed them to be beaten and maimed for the war effort. Mitsubishi was not merely a collaborator.

Here is the statement released in Los Angeles, California at the Museum of Tolerance by Mitsubishi Materials Corporation on July 19, 2015. We will post the Japanese as soon as we can obtain it.

Good afternoon, ladies and gentlemen, speaking on behalf of Mitsubishi Materials, thank you very much for this opportunity to meet with you today at the Museum of Tolerance.

Mitsubishi Mining Company Limited, the predecessor of Mitsubishi Materials, was engaged in coal and metal mining during World War II. As the war intensified, prisoners of war were placed in a wide range of industries to offset labor shortages. As part of this, close to 900 American POWs were allocated to four mines operated by Mitsubishi Mining in Japan.

I joined Mitsubishi Materials as a postwar baby-boomer and have worked in the company for 34 years. I have read the memoirs of Mr. James Murphy, who is present here at this ceremony, and those of other former POWs, as well as records of court trials. Through these accounts, I have learned about the terrible pain that POWs experienced in the mines of Mitsubishi Mining.

The POWs, many of whom were suffering from disease and injury, were subjected to hard labor, including during freezing winters, working without sufficient food, water, medical treatment or sanitation. When we think of their harsh lives in the mines, we cannot help feeling deep remorse.

I would like to express our deepest sense of ethical responsibility for the tragic experiences of all U.S. POWs, including Mr. James Murphy, who were forced to work under harsh conditions in the mines of the former Mitsubishi Mining.

On behalf of Mitsubishi Materials, I offer our sincerest apology.

I also extend our deepest condolence to their fellow U.S. POWs who worked alongside them but have since passed away.

To the bereaved families who are present at this ceremony, I also offer our most remorseful apology.

This cannot happen again, and of course, Mitsubishi Materials intends to never let this happen again.

We now have a clear corporate mission of working for the benefit of all people, all societies and indeed the entire globe. Respecting the basic human rights of all people is a core principle of Mitsubishi Materials, and we will continue to strongly adhere to this principle.


Our management team wishes for the health and happiness of our employees every day, and we ask that all of them work not only diligently, but also with a sense of ethics.
Mitsubishi Materials supplies general materials that enrich people’s lives, from cement to cellphone components and auto parts, all of which are closely related to people’s lives. We also place a strong emphasis on recycling for more sustainable societies, such as recovering valuable metals from used electrical appliances and other scrapped materials.

Here in the United States, we have plants for cement and ready-mixed concrete, and a sales headquarters for our advanced materials and tools business, all in California, as well as a polysilicon plant in Alabama. We believe that our company provides fulfilling jobs for local employees and contributes to host communities through its business.

I will visit the museum the day after tomorrow to view the exhibits and visualize how POWs were forced to work under harsh conditions. For now, however, I am pleased to announce that Mitsubishi Materials has donated 50,000US dollars to the museum to support its activities.

Finally, I sincerely thank Ms. Kinue Tokudome and the members of the American Defenders of Bataan & Corregidor Memorial Society for creating this opportunity to meet with you today. I also express my sincere thanks to Rabbi Abraham Cooper for offering the Museum of Tolerance as a venue for the ceremony. And I express my deep gratitude to all others involved in arranging this gathering.

I would also like to thank the family members of a non-U.S. POW who have come from very far away to attend this ceremony.

I truly hope that this gathering marks the starting point of a new relationship between former POWs and Mitsubishi Materials.
Thank you very much.
at July 21, 2015