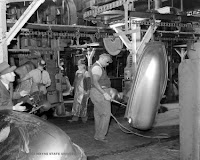 Creeping back into the American economic discussion is the issue of “competitiveness.” This was a hot idea in the mid-1980s. Then, like now, cheap foreign labor and products combined with Asian and European industrial policies were gutting American industry and displacing jobs. Today’s emphasis is on diminishing innovation and scientific and engineering excellence. In both approaches, the objective is to save American manufacturing.

Back in 1983, then-President Ronald Reagan appointed a Commission on Industrial Competitiveness, chaired by John Young of Hewlett-Packard. It issued its report* in 1985. The commission defined competitiveness as “the degree to which a nation can, under free and fair market conditions, produce goods and services that meet the test of international markets while at the same time maintaining or expanding the real incomes of its citizens.” Its key findings were:

1. There is compelling evidence that this nation’s ability to compete has declined over the past 20 years. We see its effects both in our domestic markets and in our ability to sell abroad;

2. We must be able to compete if we are going to meet our national goals of a rising standard of living and strong national security for our people;

3. Decision makers in both the public and private sectors must make improved competitiveness a priority on their agendas. As a nation, we can no longer afford to ignore the competitive consequences of our actions—or our inaction.

This report, however, made a bigger impression upon America’s foreign competitors than on U.S. policymakers. The proposals cited were taken far more seriously in Tokyo than New York or Silicon Valley. Except for the Washington Post, which did two major articles, the 1985 Young Commission report was limited to small stories buried on the business pages of the major newspapers. It got all of one-day US media coverage.

The Commission's conclusions were dismissed as industrial policy and unnecessary in free market America. Yet, the emphasis was that US competitiveness is not an end in itself but important for its effect on US living standards. Manufacturing matters for national economic health.

Today, US manufacturing has further diminished. Right after World War II, manufacturing accounted for 40% of American jobs; today, that number is closer to 11%. These jobs were the mainstay of the middle class. The 1985 confidence of American technological advantage has also deteriorated and is now considered a crisis. The new report on “competitiveness” out of the National Academy of Science is Rising Above the Gathering Storm Two Years Later: Accelerating Progress Toward a Brighter Economic Future.

It is a follow up of the 2005 study (published 2007), Rising Above The Gathering Storm: Energizing and Employing America for a Brighter Economic Future, of the congressionally requested  Committee on Prospering in the Global Economy of the 21st Century chaired by Norman R. Augustine, retired head of Lockheed Martin.

The conclusion of these reports is simple: “U.S. advantages in the marketplace and in science and technology have begun to erode. A comprehensive and coordinated federal effort is urgently needed to bolster U.S. competitiveness and pre-eminence in these areas so that the nation will consistently gain from the opportunities offered by rapid globalization.” Committee chair Norman R. Augustine said, "America must act now to preserve its strategic and economic security by capitalizing on its knowledge-based resources, particularly in S&T, and maintaining the most fertile environment for new and revitalized industries that create well-paying jobs. The building blocks of our economic leadership are wearing away. The challenges that America faces are immense."

In September, the House Oversight and Government Reform Committee, Subcommittee on National Security and Foreign Affairs held a hearing entitled, “Made in the USA:Manufacturing Policy, the Defense Industrial Base, and U.S. National Security.” This hearing examined the national security implications of US manufacturing policy, with a focus on the security challenges posed by a shrinking defense industrial base and domestic supply chain. Witnesses warned of the dangers of a growing share of military components coming from abroad.

On December 9th, AEI held a program Can the United States Double Exports by 2015? The keynote was given by Jim McNerney, Chair of the President’s National Export Council, and chairman, president, and CEO of the Boeing Company. His talk echoed the concerns raised by the Gathering Storm report as well as congressional hearing.  He worried about American education and declining math and science test scores. He lamented the “shrinking American industrial base,” which he said was “historically one of the United States’ greatest strategic assets.” And at its heart was aerospace and defense technology and the “critical” encouragement of the Department of Defense.

His solution was “a national industrial strategy that focused on national technical leadership.” He was delighted that the US Senate had finally ratified treaties with the UK and Australia to streamline military sales by eliminating most export licenses. And commended the President for his efforts to streamline the export control process. In sum, the Boeing Chairman advocated defense technology sales as the engine for technological excellence and export growth.

As Mr. McNerney told an incredulous Washington Post reporter, there is a “strong connection between economic and military power." Foreign military sales were the remaining option to shelter American manufacturing. Unsaid was that defense technology is a highly protected, regulated, and government-funded industry. Weapons are not a free trade commodity. They represent an industry Washington can protect as carefully as other countries protect their consumer product manufacturers.

*This document is difficult to find on line, thus this retyped chapter from the National Academy of Engineering book from the Young Commission, The Positive sum strategy: harnessing technology for economic growth By Ralph Landau, Nathan Rosenberg.