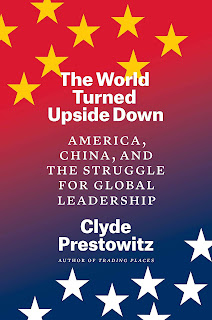 Before his death in 1994, Richard Nixon reflected that his much-acclaimed diplomatic masterstroke — the opening of US relations with China — might have been a mistake. “We may have created a Frankenstein,” the former US president said in an interview.

The comment represented an early inkling of what has become a deep foreboding. As Joe Biden takes office as America’s 46th president, a huge China challenge is sitting in his inbox.

The new president will have little time to read books. The militarisation of downtown Washington, a raging pandemic and a global tilt toward authoritarianism are just some of the issues on his plate. Nevertheless, his staff should take the time to delve into three perceptive guides — written from a western perspective — that provide insight and suggestions on how to grapple with China.

Things have moved on a lot since Nixon’s “Frankenstein”, a comment that was made in the aftermath of the Tiananmen massacre in 1989. Then it was China’s own citizens who paid the price for defying the Chinese Communist party. Now the fate of the free world is at stake, if these three timely and thought-provoking books are correct.

Clyde Prestowitz, who worked for President Ronald Reagan and has advised subsequent US administrations since then, offers particularly stark judgments in The World Turned Upside Down. He also offers pithy advice for the new American president.

“The first thing [the new] president must do is to use his inaugural address as a wake-up call to the nation and the free world . . . to recognise the China challenge,” Prestowitz writes. “He must explain and emphasise that we are talking about the most difficult and dangerous external challenge the United States and the free world have ever faced.”

Many in the US have lambasted China for a litany of supposed sins, not least during Donald Trump’s administration. What makes Prestowitz’s book refreshing is that he also takes aim much closer to home. He skewers corporate America and the coterie of Washington’s China lobbyists for perpetuating what he sees as systemic failures in US policy toward Beijing. The ire of a former insider crackles with an undisguised alarm.

He identifies a “siren song” that seduced US policy and to which, he ruefully admits, he also fell prey. The tragic delusion that Washington allowed itself to buy into was “constructive engagement”, a notion that investing in China would somehow foster greater freedoms in the world’s largest communist country.

This fantasy’s most influential adherent was President Bill Clinton, who negotiated China’s accession to the World Trade Organization in 2001. The agreement, Clinton said at the time, would mean that China imported “one of democracy’s most cherished values, economic freedom”. And this, he added, “may lead to very profound change. The genie of freedom will not go back into the bottle.”

With hindsight, it is clear that that particular genie was imaginary.

The China of Xi Jinping, its leader since 2012, is considerably more authoritarian than it was when Clinton, his cabinet, national security advisers, trade representatives and most of Washington’s leading think-tanks placed their faith in “constructive engagement”. Indeed, President Xi in 2013 expressly banned the promotion of universal values, a free press and economic privatisation.

Thus it is now obvious, Prestowitz says, that the US-led west has lost a big bet. The free world had wagered that globalisation would not only open China’s markets to free trade and competition but would also liberalise that country’s political environment. Beijing remained unmoved, using the surge of inward investment to bolster its technological base and strengthen its economy without liberalising its society or politics one iota.

So what should the US do now? Before getting to his policy prescriptions for a new administration, Prestowitz provides an unsparing analysis of how Washington’s elite fell into the grip of their China delusion.

“The answer, I think, is that they desperately wanted to believe for two reasons,” he writes. “One was that the corporations that largely run Washington saw huge business opportunities in China and were determined to cash in. The second was that the leading pundits and academics of the time told them it was all true.”

In one of the book’s best sections, he gives a long list of former US officials from Henry Kissinger onward who found a second career lobbying for corporate America in China. But in their efforts to ingratiate themselves with Beijing, these influential US figures soon found themselves also doing China’s bidding back in Washington.

Ultimately, corporate America has become Beijing’s most potent force in Washington. When the representatives of US companies that do extensive business in China are called on to testify before Congress, for instance, they “do not necessarily present what is best for America”, writes Prestowitz. “They are often thinking of what is best for their business in circumstances under which Beijing has them by the balls while they, by dint of their legally unlimited political donations to US politicians, have Washington by the balls,” he adds. Prestowitz names Maurice Greenberg, ex-head of the insurance giant AIG, and Fred Smith, the boss of FedEx, the US parcel delivery company, among the corporate titans that played this game.

“[Smith] became a master at playing Washington, putting ex-senators and congresspersons on his board, donating to all the influence makers just as [Greenberg] did and making big contributions to political campaigns,” Prestowitz writes.

The captive nature of corporate America is also seen in its subservience to Beijing. When China was disenchanted in 2019 with an app that Hong Kong demonstrators were using to track the Hong Kong police, Apple deleted it from its app store (though the company said it did so as it contravened internal guidelines). Google also deleted from its Play Store a game that echoed the Hong Kong protest movement. The list goes on: Delta Air Lines, Gap, Activision Blizzard, Medtronic, Marriott and others have all moderated their behaviour, apologised or taken other steps to appease Beijing.

In his advice to the new administration, Prestowitz suggests a series of actions directed not so much at China as at the behaviour of American companies and institutions. Businesses that comply with China’s interference in their freedom of speech should be fined by Washington, he says. When US company spokespeople opine on China, they should have to divulge their company’s track record in the People’s Republic.

The author also recommends new policies on political donations, tax, market access, monetary policy, manufacturing investment and several other areas with the aim of maintaining America’s position as the “world’s most competitive economy”.

In case the reader is left in any doubt over how Prestowitz sees his call to action, he writes the new president a script. The White House must make clear that national interests outweigh those of multinationals and investment banks, the author argues, adding, “and he must explain that the cold war with the Soviet Union was just a warm-up game for the main match now coming”.

Visions of a chilling future also feature in Nigel Inkster’s The Great Decoupling. Though his tone is more measured than that of Prestowitz, it reinforces a sense that the US-led west and China are locked in a desperate struggle not only for technological supremacy but also — in the case of the west — to preserve its liberal system.

“China’s emergence as a powerful modern state with a different ideology and values and a long-term strategy pursued through a centralised, state-driven all-of-nation approach has raised serious questions about how fit for purpose the western liberal democratic order is in the 21st century,” writes the former director of operations and intelligence for the British Secret Intelligence Service (also known as MI6).

The stage is thus set for a contest between China and the west that will define this century and shake up relations in trade, economics, finance, technology and other areas. In the process, global rules will need to be rewritten as globalisation regresses to give way to a system based more on regional trading arrangements.

Like Prestowitz, Inkster does not appear at all certain that the west will prevail in the contest that he describes. He observes mounting speculation about the US and China becoming embroiled in a new cold war, something he sees as inappropriate. “A better analogy might be the relationship between Britain and Imperial Germany in 1914 that involved strategic rivalry but also an entanglement so deep that commentators at the time believed it would make war between them inconceivable,” writes Inkster. “In the event, it did not.”

Inkster does not predict conflict but says the odds for it are shortening. The commercial decoupling between the US and China is driving the two sides further apart and generating a climate of distrust in which each side’s behaviour is interpreted in worst-case terms. Each side is therefore incentivised to maximise espionage and covert efforts to undermine the other, he writes.

There is, however, a middle ground, according to Luke Patey. In How China Loses he writes that if Beijing loses in a contest with the west, the fallout would be so widespread that the world itself would lose. His argument is that China’s co-operation is crucial to the future of the global commons, particularly at a time when climate change threatens the livelihood of all humanity.

For this reason, Patey, a researcher at the Danish Institute for International Studies, says that middle powers such as India, Japan, Germany and France (the UK goes unmentioned) have an obligation to make their influence felt so that the world’s destiny is not reduced to the outcome of belligerence between superpowers.

His prescription is classic balancing. He calls for a push-back against Chinese assertiveness, for example in the East and South China Seas. But he says that the aim of such resistance should not be to contain Beijing but to deter it from going too far. The aim of such a policy would be to “advance multilateralism to establish common rules and norms in world affairs”.

It is hard to give up on the hope that such a comforting future might still be possible. But Prestowitz and Inkster can muster little, if any, faith that accommodation between the west and China towards a shared prosperity is still workable. Nixon’s foreboding is starting to look more prescient, at least from a western perspective. China exhibits little inclination to take its place in a US-led international order that was not of its making.

President Biden may be obliged to accept that the days of US co-operation with China are waning and prepare to set about protecting the west’s democracy while there is still a chance.