The dark corners of Japanese justice 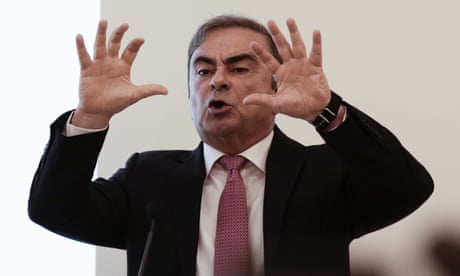 The former Nissan boss is right to point the finger at a legal system that the UN has described as ‘medieval’
The Guardian, 8 January 2020
by Jeff Kingston, director of Asian studies at Temple University Japan and APP member

In a long and detailed press conference on Wednesday, Carlos Ghosn – former head of the Renault-Nissan-Mitsubishi alliance, who made a dramatic escape from his house arrest in Japan last month – came out with guns blazing.

Speaking in Beirut, he alleged that former Nissan colleagues and prosecutors were co-conspirators in a plot to oust him in order to prevent a closer merger with Renault. Ghosn denied the allegations against him, which include under-reporting his income and misusing company funds, and said that he was mistreated while in solitary confinement. This included interrogations that lasted for up to eight hours a day without a lawyer present. The presumption of guilt, and the pressure placed on him by Japanese prosecutors to confess, convinced him that there was no chance of a fair trial. And so he fled.

Given his brash demeanour and immense wealth, Ghosn is not a sympathetic character. Indeed, he may well be guilty of financial misconduct. But he is right to shine a light into the dark corners of Japan’s justice system. Anyone familiar with the Japanese justice system would know that Ghosn’s allegations are not far-fetched.

In Japan, laws are used as weapons against targeted people and not applied equally. One example of this is the “hostage justice” (hitojichi-shiho) system. Hostage justice boils down to the accused remaining in custody until they incriminate themselves by signing a confession. Often this is drawn up by prosecutors who browbeat the accused without defence counsel. Knowing that the playing field is tilted in favour of the prosecutors and that they could spend a very long time in jail even before going to court, many innocent defendants confess. Ghosn spent more than 120 days in detention.

In the late 1980s, a once high-flying company president called Hiromasa Ezoe was accused of bribery. Despite extreme pressure to confess, Ezoe defied prosecuting authorities by pleading not guilty. Over a decade of judicial purgatory later, he was effectively exonerated by receiving a suspended three-year sentence in 2003. In 2010 he published a book, Where is the Justice?, a savage indictment of a system in which the presumption of innocence is abandoned and defendants are railroaded. Ghosn may well have wanted to avoid this fate.

In Japan, the accused can be held for 23 days without charge – this is almost indefinitely renewable as judges normally give prosecutors the benefit of the doubt. In April 2019, more than 1,000 lawyers and scholars submitted a petition to the justice ministry demanding an end to this antediluvian system. The Japan Federation of Bar Associations has also long lobbied against it.

The 2019 petition doesn’t mince its words, asserting that the “long-term detention in the Carlos Ghosn case has triggered surprise and criticism overseas, leading to doubts about Japan’s integrity as a democratic nation that guarantees human rights”.

Japan’s hostage justice, interrogation procedures barring lawyers and arbitrary denial of family contact are out of step with many other democracies and international law. The UN Human Rights committee has called on Japan to reform its criminal justice system to allow for the presence of defence counsel, while a UN committee against torture called Japan’s criminal justice system “medieval”.

In recent years, the media has exposed many cases of prosecutors’ abuse of power, inventing, misinterpreting or ignoring exonerating evidence in an attempt to maintain the dubious distinction of a 99% conviction rate. Recognising the problem, the justice ministry has since the 2000s introduced piecemeal reforms to reduce dependence on confessions and allowing some videotaping of interrogations. Even so, the system remains stacked against defendants.

While Ghosn managed a dramatic escape, ordinary Japanese citizens remain vulnerable to a judicial system that draws sharp criticism from domestic civil society organisations, lawyers’ federations and the media. The vested interests are scrambling to defend this system, but it’s high time to end the era of Japanese prosecutors running amok and trampling on civil liberties.
at January 08, 2020