Can the Statue of Peace find Peace? 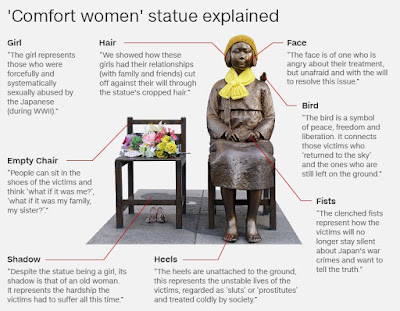 On Sunday, October 27, 2019 at 3:00pm on the front lawn of 7601 Little River Turnpike, Annandale, Virginia a Comfort Woman Statue will be unveiled.


Known as the "Statue of Peace," and also called Sonyeo Sang [Statue of a Girl] this is THE Comfort Woman statue. It was designed by the Korean sculptor couple, Kim Seo-Kyung and Kim Un-Sung. The first statue was installed in front of the Embassy of Japan in Seoul, Korea by the Korean Council for Justice and Remembrance for the Issues of Military Sexual Slavery by Japan on December 14, 2011 in commemoration of the 1000th Wednesday demonstration.

This powerful, interactive artwork has been displayed by Asian American civic groups throughout the United States, despite Japanese rightwing and government opposition. The Annandale memorial is the 5th Statue of Peace and the 14th Comfort Women memorial in the U.S. Only a small number, however, are on public land. 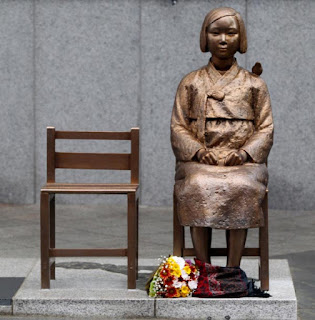 Why are these statues necessary? What is it about the visual image--especially one that is well done with artistic grace--that can persuade where words cannot? Why is not recognized that what happened to the women, girls, and boys who were used for sexual service to the Imperial Japanese military is obviously wrong? Why is taking responsibility even harder?

Recently, the Washington Post’s Bob Woodward interviewed the New York Times’s Jodi Kantor and Megan Twohey about their best-selling book, She Said, that discusses their investigation of sexual assault and harassment allegations against Hollywood mogul Harvey Weinstein. The exchange highlights how far we still have to go to educate people, not just men, about sexual violence.

Woodward was genuinely puzzled by Weinstein's motivations and pathology. “If you spent all the time on him, you have to ask the question, which you really don’t address in the book, and that is: Why did he behave this way?” Woodward asked. “I know you’re not psychiatrists or psychologists, but share with us the ‘Why?’ … because there’s so many strange things he does.”

"I’ll tell you what we know. It’s that this story is an X-ray into power, and how power works,” Kantor said, as the crowd erupted into loud applause. “It’s also about sex, isn’t it?” Woodward asked. “No!” several attendees yelled at the same time. “It’s not about sex in the romantic sense,” Kantor said, adding that “part of the way it’s about power is that it’s about work.”

Thus, many people in prominent positions are still going through the motions of understanding how sexual violence works. No more is this true than in Japan as you can see in Abe's recent encounter with Nobel Laureate Nadia Murad. This meeting was only reported by JiJi and is NOT recorded on Abe's social media or official daily news. It is odd that it is not.


Abe Meets Nobel Peace Prize Winner Murad. JiJi, 9/25/19.Japanese Prime Minister Shinzo Abe held talks with Nobel laureate Nadia Murad in New York on Tuesday. Murad, who won the 2018 Nobel Peace Prize, is a human rights activist who drew attention to the use of sexual violence by the Islamic State militant group against members of the Yazidi minority in Iraq. Abe told Murad that Japan will continue to work on efforts to prevent rape in conflict and on support for female victims. [There is no mention of this meeting on the PM's website or MOFA]

Japan [and Korea] will have an opportunity to display its commitment to preventing rape next week, October 29th, at the UN Security Council's annual debate on women, peace and security. You can check up on them at the UNSC news site. They usually publish a good summary of events. You can also watch the debate either live or later. This day is the 19th Anniversary of UNSC Resolution 1325 and the creation of the Women, Peace and Security Agenda.

The next day, October 30th, will be a celebration for the 10th anniversary of the establishment of the UN Office of the Special Representative of the Secretary-General on Sexual Violence in Conflict by Security Council resolution (SCR) 1888 (2009). All are welcome.

Both 1325 and 1888 are part of a 20 year series of UN resolutions recognizing the detrimental impact that sexual violence in conflict has on communities and acknowledging that this crime undermines efforts to ensure peace and security and rebuild societies once a conflict has ended. These resolutions signal a change in the way the international community views and deals with conflict-related sexual violence. It is no longer seen as an inevitable byproduct of war, but rather a crime that is preventable and punishable under International Human Rights Law and International Criminal Law.

In other words, it was not until 2000 that the UN Security Council began officially to mandate that a gender perspective be integrated throughout all aspects of peace and security. It was not until this century that a political framework was established to recognize that women and sexual violence in warfare are relevant to negotiating peace and reconciliation agreements. There is still much to do to educate that rape is about power. The objections that the Abe government and friends have about recognizing the Comfort Women as sex slaves are products of an antiquated view of women and warfare. Unfortunately, they have not grown with the times.