Today, August 4th, is the 20th Anniversary of the Kono Statement, Japan's unofficial apology to the women and men who served as sex slaves to Japan's military and their contractors. It is a statement of acknowledgement, it asks for forgiveness, and uses clear apology language. It was followed up by a program of atonement, the Asia Women's Fund.

Unfortunately, all the good intentions of this apology were undermined by Japanese denier politics. The apology was publicized, yet it was never approved by the Cabinet and, thus, was never an official governmental statement. This was driven home by Prime Minister Shinzo Abe during his first term where he issued a Cabinet Decision affirming that the Kono Statement had never been approved by the Cabinet. The atonement fund did not draw funds from the public treasury--where the "salaries" of many Comfort Women still remained--but from private individuals. The contemporary Japanese state took no responsibility, other than to "administer" the fund, much like Imperial Japan administered the Comfort Women system.

In 2006, the U.S. House of Representatives began to take notice of this historic injustice. It echoed so many international conflicts in which women and children were the main victims; where sexual violence was a rationalized norm. The international community was fast accepting that this "norm" of warfare was an unconscionable crime.

The personal anger and humiliation of the victims being voiced in the new democracies of Asia highlighted the  failure of a responsible, appropriate apology by a modern Japan. Time did not bury the pain. Time, in this case, provided the scholarship and knowledge that rape is a form of power and is a crime. Time only seemed to stand still for Japan's leaders.

Congress awakened to the issue of the Comfort Women through an understanding of the consequences of the many assaults on women's dignity worldwide. To learn more, members of congress reached out to the victims and scholars for briefings and information.

On Shinzo Abe's birthday, September 21, 2006, and a few days before Abe would become Prime Minister, Congressman Lane Evans (D-IL) hosted a press conference and briefing on the Comfort Women issue and a resolution he was sponsoring, the precursor to the 2007 H. Res. 121, asking Japan for an official apology to the Comfort Women.

Among the speakers were Congressman Edward Royce (R-CA). His prepared and presented remarks, as you can see below, were the most eloquent and insightful of the day. Representative Royce is now Chairman of the House Foreign Affairs Committee 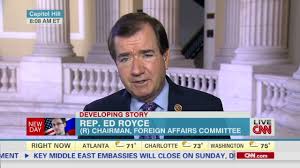 The Imperial Government of Japan orchestrated the enslavement of up to 200,000 young women.  Many of these women were abducted from their homes and sent to Japanese Military brothels.  Others were lured from their homes under the false pretense of work or employment.  Of course, they found neither.

The trauma and shame that these women suffered drove many to conceal their past, either too embarrassed or scared to speak of it.  Many died without ever mentioning their ordeal, suffering in silence and psychological angst.

To this day, maintains that all potential claims by individuals for sufferings inflicted in the war were closed years ago, by treaties normalizing its ties with other Asian countries.  Clearly, many feel differently.  The Korean Council for the Women Drafted for Military Sexual Slavery in and groups of former comfort women continue to hold demonstrations outside of the Japanese Embassy in every week, rain or shine.  They have done so since 1992.

Still, the Japanese government continues to deny these women the full recognition they deserve.

But that is why we are here today.  Those here recognize that confronting this issue is the right thing to do.  Those of us in Congress are taking action to see that the Japanese government confronts this dark part of the history of Imperial Japan.  Recently, the House International Relations Committee, on which I, Chairman Chris Smith, and Ambassador Watson serve, passed out of committee H. Res. 759, the Japanese Comfort Women Resolution, a bill that I am proud to have cosponsored.  This resolution calls on the Japanese government to formally acknowledge and take full responsibility for their sexual enslavement of thousands of young women.

Some have asked me why do this now?  Certainly time has passed.  Yesterday my Committee held a hearing on the killing in .  What we have there is genocide being conducted by the Sudanese government.  Much of the world, sadly, is ignoring this killing.  The Chinese government is blocking sanctions.  The world's strength to oppose killing today is made greater by accountability, for actions present, but also past.  It's weakened by denial of accountability and obfuscation of past acts.  History is a continuum that affects today and tomorrow.  It's much harder to get tomorrow right if we get yesterday wrong.